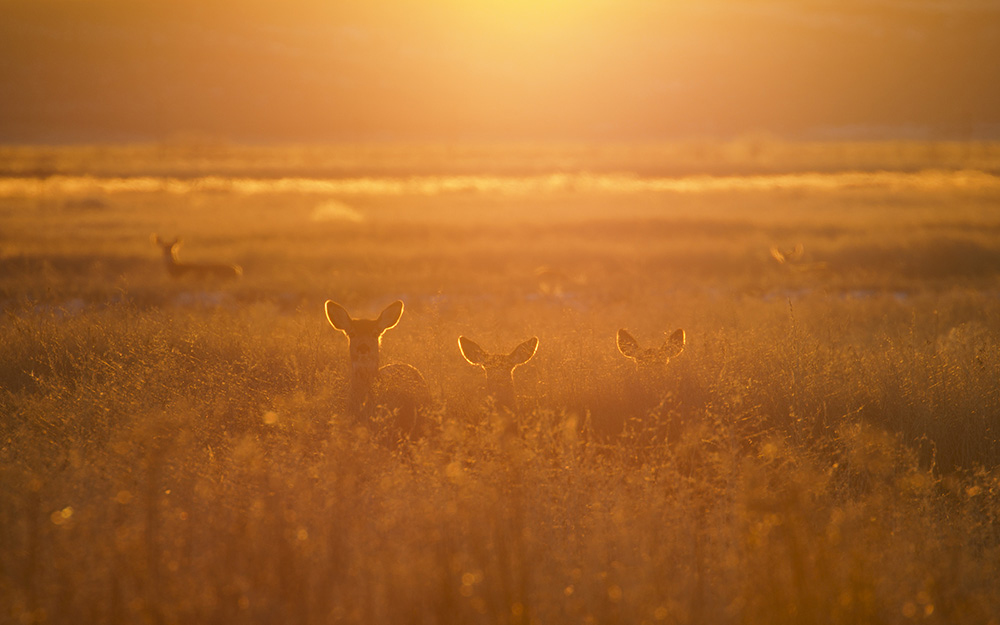 The unique wetland oasis of Malheur Refuge, surrounded by the sagebrush and juniper desert characteristic of the northern Great Basin, is well known for its migratory bird life. While a few of those bird species live year-round at the Refuge, most move on as seasons change. By contrast, nearly all of the mammals occurring at Malheur Refuge stay put all year. Smaller mammals hibernate or otherwise go into torpor, while others weather the frigid winters by layering up under fat and fur and being resourceful.

Some sixty mammal species call Malheur Refuge home. There are, for instance, at least 13 species of bats, as well as 25 different rodent species. But the mammals that capture visitors’ attention most readily tend to be the large ones: deer, coyotes, bobcats, pronghorn. Highlighted here are a few of our favorites.

Nearly every terrestrial habitat type at the Refuge is used by these widespread ungulates. Mule deer possess the keen senses required to avoid predation: acute hearing and sense of smell, as well as large eyes with a wide field of view. During the winter rut, bucks clash antlers to compete for breeding partners; these antlers are shed every spring to regrow in full by late summer.

The cunning and adaptable coyote is also widespread at Malheur Refuge. These omnivores consume a wide variety of plants and animals, allowing them to flourish in a variety of settings, from remote high desert to dense urban sprawl. The quiet mornings and evenings at the Refuge are often punctuated by yips and howls of these highly intelligent, social canids.

These large, stocky members of the mustelid family are usually nocturnal, using their massive claws to unearth burrowing prey such as ground squirrels and other rodents. Amazingly, badgers and coyotes are known to sometimes hunt burrowing mammals together! The coyote will chase down prey if it runs, while the badger will dig after prey if it heads underground into its burrow systems.

Sleek, powerful and playful, river otters are adapted to life in water, equipped with webbed hind feet and thick insulating fur. Related to badgers and weasels, otters prey on a variety of creatures including fish, crustaceans, and the occasional bird or small mammal.

Black-tailed jackrabbits (along with true rabbits) belong to the mammalian order Lagomorpha, a classification that sets them apart from other groups of small mammals such as rodents and shrews. While both rabbits and jackrabbits sport long ears and long hind legs, jackrabbits tend to be larger, with longer ears and limbs. In the heat of summer at Malheur Refuge, jackrabbits conserve energy by resting during the day and being active by night; this behavior switches over in the winter.

Pronghorn are capable of sustained sprints topping 50 miles per hour, making them the fastest land mammal in the Western Hemisphere. It’s thought that this impressive speed—which far outpaces any extant North American predator—is a vestigial trait that arose during the Pleistocene, when cheetah-like cats roamed North America’s grasslands and preyed on pronghorn. Read more about pronghorn in our blog post here.

The bobcat is one of two felids native to Malheur Refuge–the other being the mountain lion. Both are shy, solitary and mostly active at night, so sightings at the Refuge are uncommon to rare. Occasionally visitors are treated to the sight of a bobcat padding silently down a Refuge road, availing itself of a well-groomed trail as any sensible creature would.