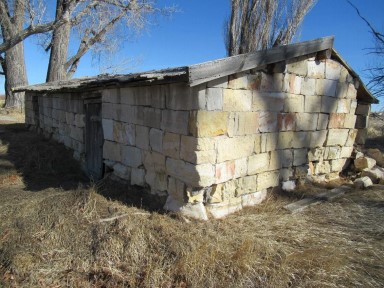 Written by Peter Pearsall/Photo by USFWS

Located along the south shore of Malheur Lake on the Refuge, Sodhouse Ranch is the northern terminus of what had been one of the largest cattle ranches in the U.S. during the late 1800’s: the French-Glenn Livestock Company, owned by Dr. Hugh Glenn of California and managed by John William “Peter” French.

According to Refuge documents, French purchased the property from a rancher named A. H. Robie in 1877. French continued as part owner and primary manager of the ranch for the Company until his death in 1897. It continued to be owned and operated by various entities within the French-Glenn Livestock Company until it was sold to Henry L. Corbett and the Blitzen Valley Land Company in 1907. In 1916, the Blitzen Valley Land Corporation was reorganized as the Eastern Oregon Land and Livestock Company when Louis Swift of the Swift Packing Company purchased 46% of the company’s stocks. The Eastern Oregon Land and Livestock Company later sold the Sodhouse Ranch to the federal government in 1935.

Currently Malheur Refuge staff is in the early stages of restoring this historic stone cellar. The Refuge has selected a contractor “possessing exceptional skills and experience with early 20th century building techniques and materials as well as traditional construction, stone masonry techniques, and carpentry techniques” to lead the restoration, according to the project’s Scope of Work, provided by the Refuge.

Karla Mingus, USFWS Zone Archaeologist, expects restoration work to begin on the cellar’s SE and NE corners later this summer after the nesting birds have vacated the area.