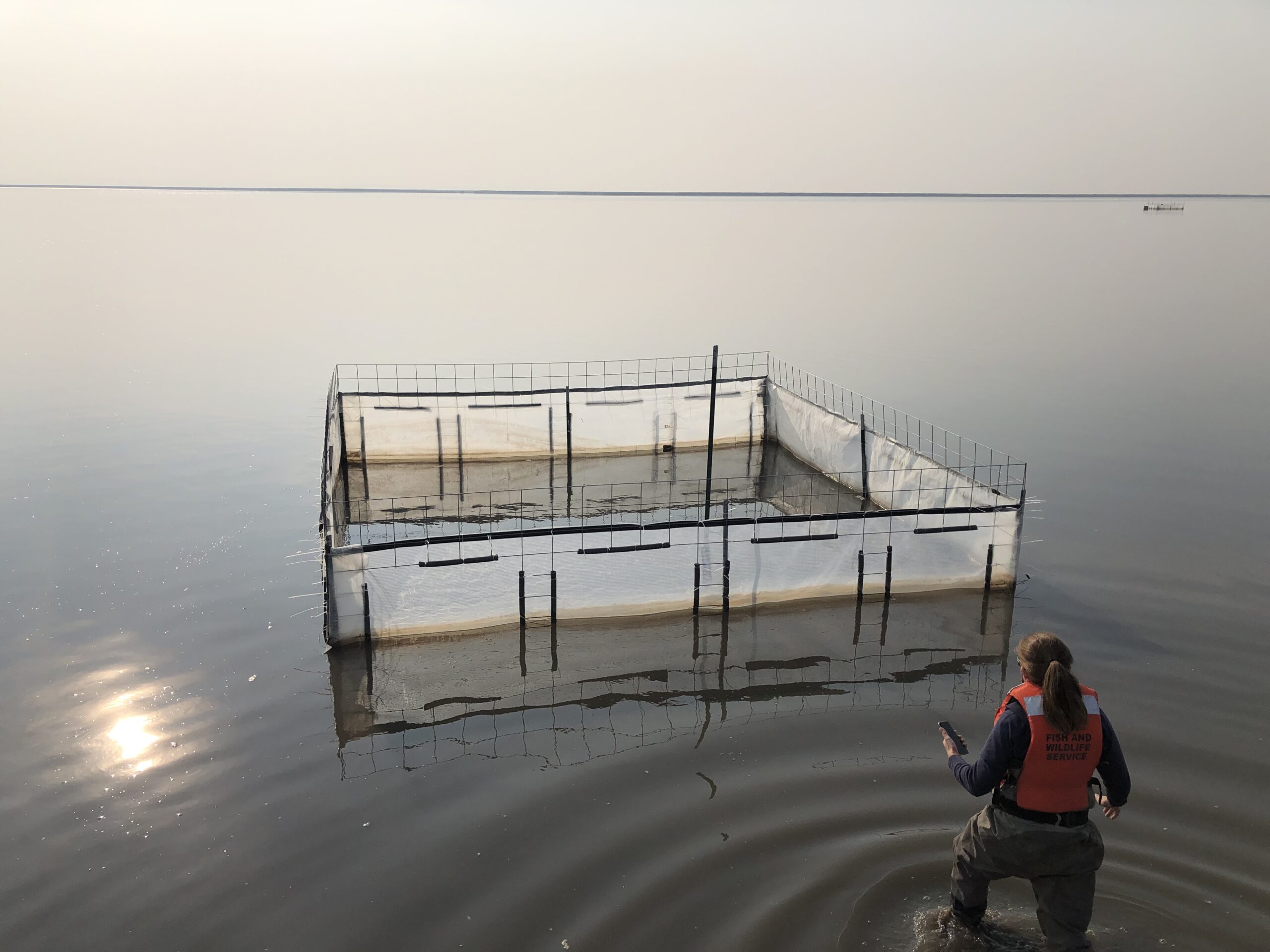 The Common Carp (Cyprinus carpio) is the eighth most prevalent nonnative invader in the world, often reaching high levels of abundance (>1000 kg/ha) due to their ability to tolerate a range of aquatic conditions. Once a population of Common carp (hereafter “carp”) becomes established, their mode of feeding can degrade aquatic ecosystems. For instance, carp use a benthic foraging technique that uproots aquatic vegetation while simultaneously increasing turbidity in the water column, which diminishes light penetration. In turn, this can further inhibit growth of aquatic vegetation. The bioturbation of the aquatic environment by carp has been hypothesized to be one of the major drivers that has led to the currently degraded (turbid) state in Malheur Lake.

Control of carp can be extremely difficult, however, due to their high capacity for population growth and expansion, survival in habitat refugia, and ability to modify their environment to their own advantage. Carp populations exhibit compensatory density dependence, in which demographic rates (i.e. mortality and recruitment) shift in response to variations in the population’s overall density. Thus, even if carp are removed in large numbers, the species can rebound quickly.

In the past, biologists with the MNWR have undertaken large-scale carp rotenone (pisicide) treatments, removing a total of 2.5 million carp. Effectiveness monitoring conducted in the years following the rotenone treatments determined that submergent vegetation and waterfowl production rebounded, however this apparent success was short lived, with the aquatic ecosystem of Malheur Lake quickly returning to the turbid state. While rotenone treatments have been successful at quickly reducing the carp population and promoting short term improvements in the aquatic health of Malheur Lake (e.g., increases in submergent vegetation and waterfowl production), rotenone treatments have failed to suppress carp over the long term, and recovery of carp is hypothesized to be the reason for the quick rebound in the turbid state. For this reason, researchers at MNWR have been working to better understand how to suppress the carp population long-term, such that the benefits of carp control can be maintained in perpetuity.

In an effort to better understand carp management, a carp population model (CarpMOD) was constructed for Malheur Lake, and simulations suggest that removal strategies that target multiple life stages (Adult and Juvenile) may be able to reduce the carp biomass below the desired threshold if the cumulative mortality is maintained at approximately 40%. Furthermore, the modeling also demonstrated that lake area fluctuations (function of annual snow pack) strongly controls the carp population dynamics due to increased density dependent natural mortality and decreased juvenile recruitment. Therefore, these model results suggest that future management actions can be more effective if plans are implemented to more strongly compound the mortality already imposed by the environment via lake fluctuations.

While collectively the MNWR aquatic health program had a very successful 2020, we are only at the beginning of a long term journey to restore the currently degraded state of Malheur Lake. On the ground research and modeling efforts have helped us understand that the current turbid state of Malheur Lake is being maintained by strong positive reinforcing feedback loops (i.e. bioturbation via carp and wind sediment resuspension), which are pulling the lake towards the turbid state. In order to shift Malheur Lake back to the historically clear state, a transformative effort is necessary, incorporating a combination of carp and wind-wave suppression, and restoration of emergent/submergent vegetation. To better understand the major mechanisms driving and maintaining the current turbid state, the MNWR has initiated three major collaborative research projects (emergent vegetation expansion and transplantation, mesocosm water quality enhancement, and carp radio telemetry), over the next two field seasons (2021-2022). Finally, it is our hope that the outputs from these collaborative research projects will help us identify the combination of restoration actions necessary to not only flip Malheur Lake, but also maintain the clear state in perpetuity for the ecological benefit of fish and wildlife species that utilize the MWNR.