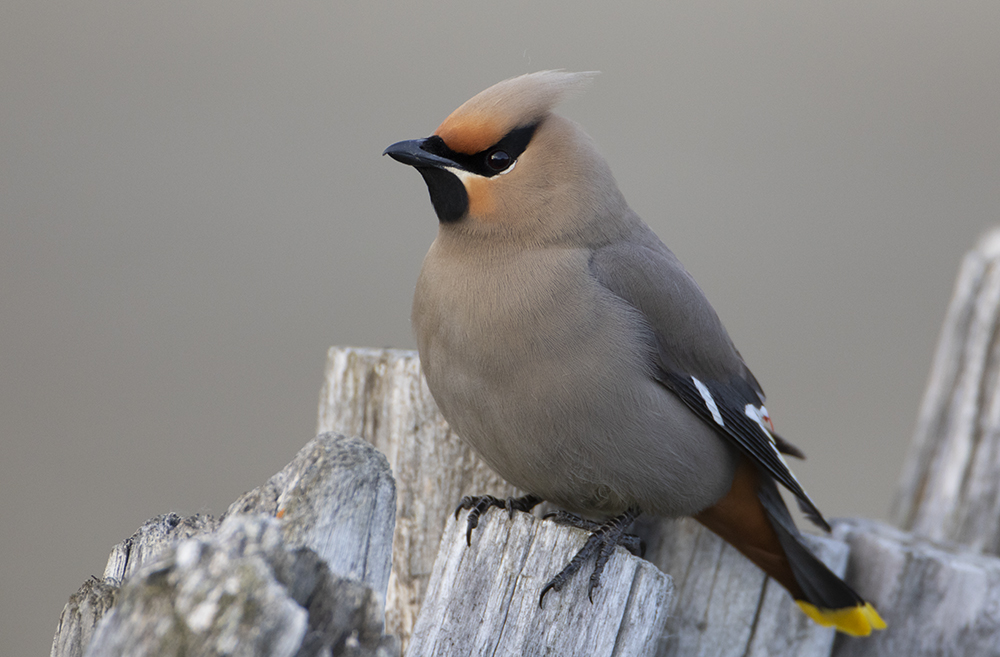 At Malheur Refuge in spring, summer and fall, cedar waxwings are commonly observed giving their high-pitched trilling calls, flocking from tree to tree in search of ripening fruit or sallying from perches to capture insects. With their subtly tinted plumage, rakish eye mask and crest, and often confiding nature, these gregarious birds are a welcome, if commonplace, wildlife sighting in Harney County.

But in winter, long after the cedar waxwings have departed south, the Refuge is occasionally host to another, less common waxwing, a wide-ranging species of North America and Eurasia: the Bohemian waxwing. Larger and deeper-voiced than cedar waxwings, with brown-accented plumage rather than yellow, Bohemian waxwings breed in the spruce-dominated northern forests of Canada, Alaska and across Eurasia. Large, garrulous flocks of this species are highly mobile in winter, roving constantly about for berries and other fruit. This itinerant, free-wheeling behavior gives these birds their “bohemian” moniker.

The other part of their name refers to the fact that both cedar and Bohemian waxwings sport distinctive red-to-orange waxy tips on the ends of their secondary flight feathers. These tips, which are the flattened ends of feather shafts pigmented by the carotenoid astaxanthin, only occur on adult birds two to three years in age. While their purpose isn’t fully clear, it’s estimated that the waxy tips signal age, maturity and social status to other waxwings in a flock.

During this year’s Harney County Christmas Bird Counts, participants found 11 Bohemian waxwings busily feeding on berries despite below-zero temperatures and dense fog. These birds are adapted to metabolize the ethanol occurring naturally in fermented fruit, but occasionally they will overindulge and become intoxicated or even die from alcohol poisoning!