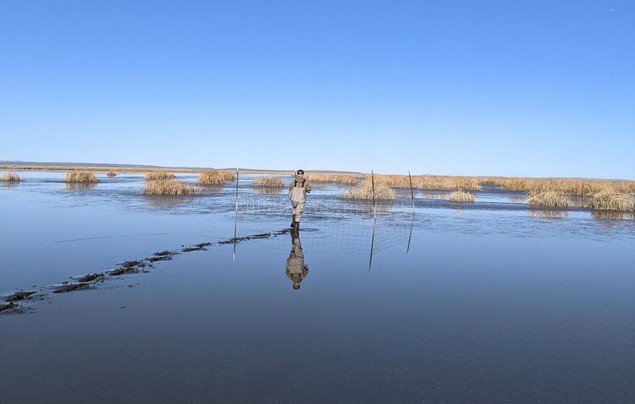 Although the term ‘lake’ has been attached to Malheur Lake for many years, this term lacks in depth considering the continued fluctuation and overall decline in water levels over the past fifty years. It can be extremely difficult for people to grasp the sheer size and shallow depths of the lake without taking an airboat ride, and, unfortunately, this just simply isn’t a service that is offered to the public. However, I can absolutely confirm that you truly have to see it to believe it.

I spent my first several months working on Malheur Lake virtually from two thousand miles away. Designing a research project without seeing your study area in person is quite a challenge. Despite refuge staff describing it to me as best as possible, I experienced some shock as I went out on the lake for the first time in late March. Gliding around on an airboat in 1-2 inches of water is not something I’d ever done before, and when the deepest part of a lake only goes up to your knees, it’s initially a little concerning. I had to do some rethinking for the logistics of my project almost immediately after arriving at the refuge.

Growing up with the Great Lakes in your backyard, as I had, really puts this kind of environment into perspective. I can hardly consider Malheur a lake when its water storage suggests more of a wetland or marsh environment. The only problem with that characterization with the current conditions at Malheur is the lack of vegetation.

In Malheur’s geologic history, emergent vegetation such as cattail and hardstem bulrush dominated the scene throughout the lake. In this sense, it would be easily considered a wetland or, more specifically, a marsh due to its plant composition. This dense vegetation provides cover for waterfowl, breeding habitat, improves water clarity, and stabilizes the substrate. It is believed that the long duration of flooding in the 1980’s in combination with the introduction of carp led to the decline of emergent vegetation, but there have been many biotic and abiotic factors affecting this lake that could have also been triggers. Regardless, water conditions and growth of vegetation has significantly declined over the years. This has left us with our current state of high turbidity and scarce patches of vegetation extending out into the lake. It is our hope that by reestablishing vegetation and helping existing patches to expand we will begin to reverse some of the problems with the lake, and that is where my research comes into the picture.

As a graduate student with Louisiana State University, I am working with refuge staff and High Desert Partnership to determine how we can start restoration processes with emergent vegetation. My first focus is around existing vegetation: why are these clumps (cattail and hardstem bulrush) not expanding into the central portion of the lake? Both of these plants can reproduce by seed and through rhizomes, which are underground stems that produce additional shoots to the surface. There are several factors that could be inhibiting the expansion of these plants; our primary concerns are herbivory and wind-wave action. It is also possible that carp are disturbing the sediment through benthic foraging, although they do not necessarily eat the plants.

To test this idea, we have set up over thirty “exclosures,” which are basically hog wire panels that keep predators away from existing plants. Some of these exclosures also have hardware cloth on them (think chicken wire) that further limit the ability of small animals to get in and out. In addition, some exclosures have plastic sheet panels outside to reduce wind-wave action through the exclosures. This will hopefully prevent vegetation from being ripped out of the ground during high winds that we constantly experience here in Harney County. These exclosures are giving hardstem bulrush some form of protection, and identifying the threat to their expansion will be incredibly helpful in the future restoration of Malheur Lake.

We have also set up several hardware cloth exclosures without clumps in the middle. Cattail and bulrush are both prolific seed producers, so plants should also be able to grow from seed. These ‘germination’ exclosures are hoping to capture the impacts of exclosures on germination of seeds in the seedbank. There was success with this last year, where empty exclosures experienced exceedingly more growth compared to the area around it. We spread out the exclosures over an elevation gradient so that water levels and drawdown conditions would vary for each exclosure. Typically, drawdowns help aquatic vegetation to establish, but water levels are so variable on the lake on a day by day basis that even 10 feet of space can result in a large difference in water levels and availability. Additionally, several clumps of hardstem bulrush were transplanted to see if that could be a viable restoration option in the future. Some of these received hog panels, and we also have controls with just t-posts surrounding them.

My second focus for the project relates to the seedbank in the lake. There are many steps that must be completed for a seed to become a thriving vegetation clump. The most intricate step of the process is germination; there are species specific conditions for seed germination which include light availability, temperature, specific water levels, soil moisture, oxygen, and depth of burial. Even one centimeter of soil on top of a seed can inhibit germination. Because of the species specific needs, we have to determine what currently exists in the seedbank and if the seeds are viable. To accomplish this we have taken over fifty soil samples to a greenhouse to put them in ideal conditions, which should allow seeds to germinate. Once we are able to identify and confirm that the seedbank is still viable, we can move forward with a specific restoration plan. This is only a two year study, but it has large implications for the future of the refuge.