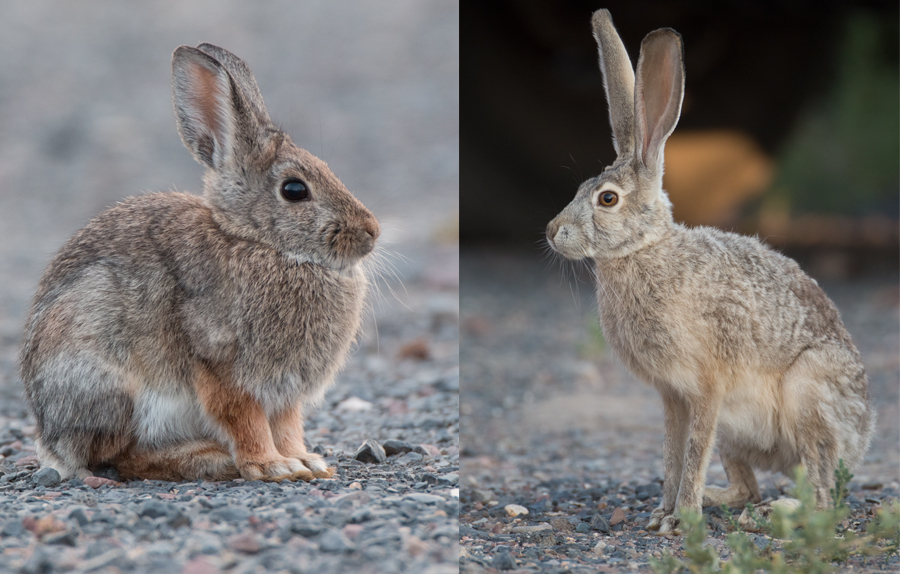 The abundance of luxuriant spring growth at Malheur Refuge means plenty of food for resident lagomorphs, the black-tailed jackrabbit (Lepus californicus) and Nuttall’s cottontail (Sylvilagus nuttallii). While both species live year-round at the Refuge, it’s in spring that young are born and sightings of these long-eared mammals become more common.

Rabbits and jackrabbits (also known as hares) belong to the mammalian order Lagomorpha, a classification that sets them apart from other groups of small mammals such as rodents and shrews. Despite the general commonalities between rabbits and hares, there are several distinct differences.

Rabbits tend to prefer semi-wooded areas with plenty of cover; hares frequent wide open spaces. While both rabbits and hares sport long ears and long hind legs, hares tend to be larger, with longer ears and limbs. Hares are also faster, which benefits them in the open habitats that they prefer: hares usually sprint away from predators, while rabbits dart to the nearest hiding place.

Baby rabbits, known as kittens or bunnies, are blind and naked at birth, fully dependent on their mother. Baby hares, called leverets, are born with fur and open eyes, ready to move around within hours of birth.

Hares and rabbits also differ in their dietary preferences. Both rabbits and hares are herbivores but hares tend to feed on woodier material, while rabbits prefer tender leaves and shoots.

This spring and summer, keep an eye out for black-tailed jackrabbits and Nuttall’s cottontails at Malheur Refuge, particularly the young of the year!