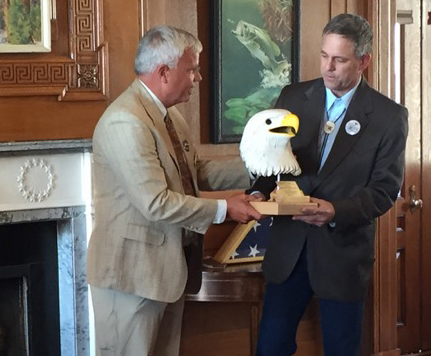 On August 31, 2019, Chad Karges, Project Leader for Malheur National Wildlife Refuge, retired. His career, spanning over 30 years, has been entirely in the National Wildlife Refuge System within the U.S. Fish and Wildlife Service. In addition to Malheur NWR, Chad worked on five other Refuges: Buffalo Lake and Matagorda Island in Texas, Kirwin in Kansas, Charles M Russell in Montana, and Salton Sea in California. His 20 year tenure at Malheur NWR began in 1999 as the Deputy Project Leader and in 2014 he was promoted to Project Leader.

The list of Chad’s accomplishments throughout his career is likely much longer than the Donner und Blitzen River. In my opinion, however, his most significant accomplishment was his vision and dedication to form ecological, economic and social partnerships. Chad departs the Refuge leaving a solid foundation for working with partners to deliver conservation not only on the Refuge but throughout the Harney Basin.

When it came time to prepare the Refuge’s Comprehensive Conservation Plan (CCP) – the management plan that guides management of the Refuge – Chad along with interested partners recognized that a new model of planning would be needed if the process to develop the CCP was to achieve success. In the beginning it was not easy but failure was not an option. His ability to form meaningful relationships resulted in strong alliances among many partners formally known as the CCP Collaborative. In 2012, the CCP was approved by the U.S. Fish and Wildlife Service and stands as a testament to the shared dedication, persistence, and lasting relationships of the CCP Collaborative partners. Consequently, the experience gained and the formative success earned from the CCP process has lead others in Harney County to utilize collaboration in order to resolve other complex problems.

Some now may wonder, without Chad, what will become of the partnerships embodied by the CCP Collaborative? I asked a similar question at the High Desert Partnership Summit in 2017 shortly after my arrival at the Malheur NWR. Chad’s response was essentially this: even when one of its members departs, the strength of a successful collaborative is the relationships of its remaining members and their collective commitment to resolve complex problems.

Change is a constant, however, I believe the CCP Collaborative will continue to function and achieve success through change because of a strong foundation and because of the dedication of those whom remain. Although Chad is moving on, his legacy of uniting diverse partners to resolve complex problems remains.

Cheers Chad! Best wishes from all of us in retirement!