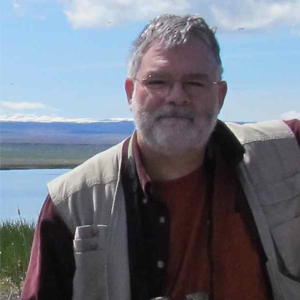 Mark was born in Salt Lake City and has lived in Utah, Montana, Minnesota, Alaska and Oregon. He enjoyed growing up in Corvallis with two younger brothers, attending school there from elementary through college at OSU. He graduated in 1984 with a degree in Wildlife Science and started working for Oregon Department of Fish and Wildlife (ODFW) in the fall of 1985. In his 27- year career with ODFW he has worked at numerous offices and Wildlife Areas. Presently he is the Manager of Sauvie Island Wildlife Area. Mark started birding at the age of 12 in 1972 and readily became involved with Corvallis Audubon Society. That year was also his first year experiencing Malheur National Wildlife Refuge, and he has revisited every year since. Mark currently lives on Sauvie Island near Portland, Oregon with his wife Nancy, their dog and their two cats.