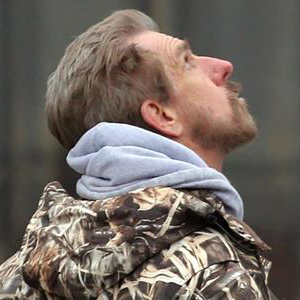 Kenn  didn’t start to notice birds until the age of six, but this interest soon developed into a lifelong passion that has never let go. He burst onto the national birding scene as a teenager in the 1970s, hitch-hiking all over North America in pursuit of birds, an adventure later chronicled in his cult-classic book Kingbird Highway. After working as a leader of nature tours to all seven continents, he switched to a career as a freelance writer, artist, and naturalist. Most of his energy currently goes into book projects and into painting bird portraits. He has written a dozen books, including his own field guide series, Kaufman Field Guides, published by Houghton Mifflin Harcourt of Boston. The series now includes volumes on North American birds, butterflies, mammals, insects, advanced birding, and the nature of New England, with a guide to nature of the Midwest as the latest addition in 2015. His other books include Lives of North American Birds and Flights Against the Sunset. Kenn currently lives in Ohio, where his wife Kimberly is now director of the Black Swamp Bird Observatory. Kenn is a field editor for Audubon magazine, a fellow of the American Ornithologists’ Union, and one of only two persons to have received the American Birding Association’s lifetime achievement award twice.