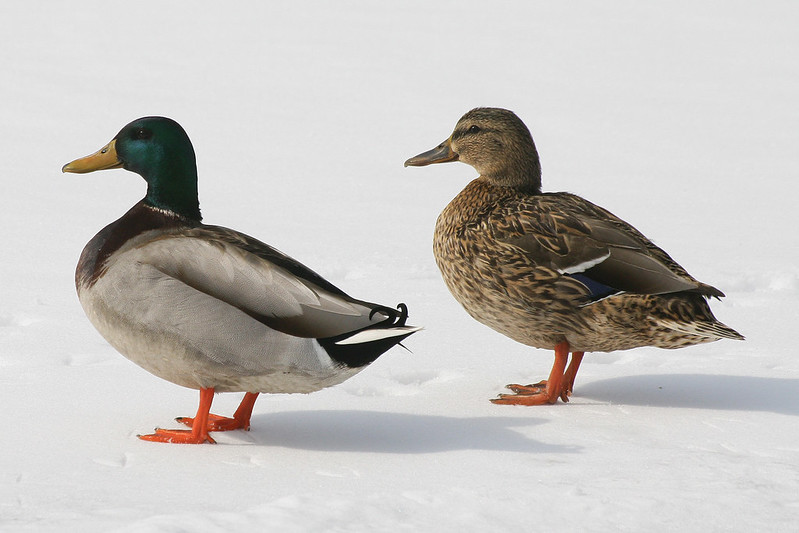 Birds, like all mammals and some fish, are homeotherms, meaning that they internally regulate their body temperature by burning calories to create and conserve heat. The challenge of maintaining a narrow, near-constant range of internal temperature during colder months is met by various means: some animals layer on heaps of energy-rich fat to metabolize in leaner times, others rely on thick, insulating coats or feathers; and some just eat continuously. (Humans, of course, avail themselves of each methodology.) Birds that spend their winters swimming, diving, and dabbling in cold water need to take particular care in keeping warm and dry, and thus many species sport a pillowy layer of down feathers overlaid by waterproof plumage. Their feet and beaks, bared to the elements, require warmth as surely as other parts of their bodies, but the route taken is a bit more circuitous (if you’ll pardon the anatomical pun).

In order to keep those exposed areas alive and warm, blood must flow freely to and from the extremities, nourishing tissues—and it must do so economically, with minimal loss of heat. Too much heat loss leads to hypothermia; too little blood flow invites frostbite and gangrene. The bird’s circulatory system achieves this balance by employing what’s called countercurrent, the side-by-side pairing of opposite flows—in this case, venous and arterial blood. Veins transport cool, oxygen-depleted blood back to the heart, while arteries furnish tissues with the warm, oxygenated stuff. In the beaks and feet of these cold-adapted birds, the veins and arteries are intertwined like a caduceus, so that arterial heat is transferred to venous chill and vice versa, ensuring a low, stable temperature in the extremities and minimizing the unavoidable loss of heat to the water. Of additional benefit is the fact that bird legs are mostly tendon, scales, and bone—the muscles are nestled close to the warm, feathered body and thus amply insulated. Mallards, for all their incessant dabbling on slushy ponds in the dead of winter, surrender a paltry five percent of their total body heat through their orange, webby feet.

This physiological countercurrency was first discovered by Galen, the second-century Greek physician-surgeon-philosopher who called the convoluted networks of veins and arteries retia mirabilia, Latin for “miraculous nets”. It is a feat of natural engineering, remarkable in its efficiency, and since Galen’s time the countercurrent has been emulated and expanded upon by humans in a variety of industrial applications, including petroleum refining, nuclear waste processing, and the extraction of gold from nickel-cyanide slurry. 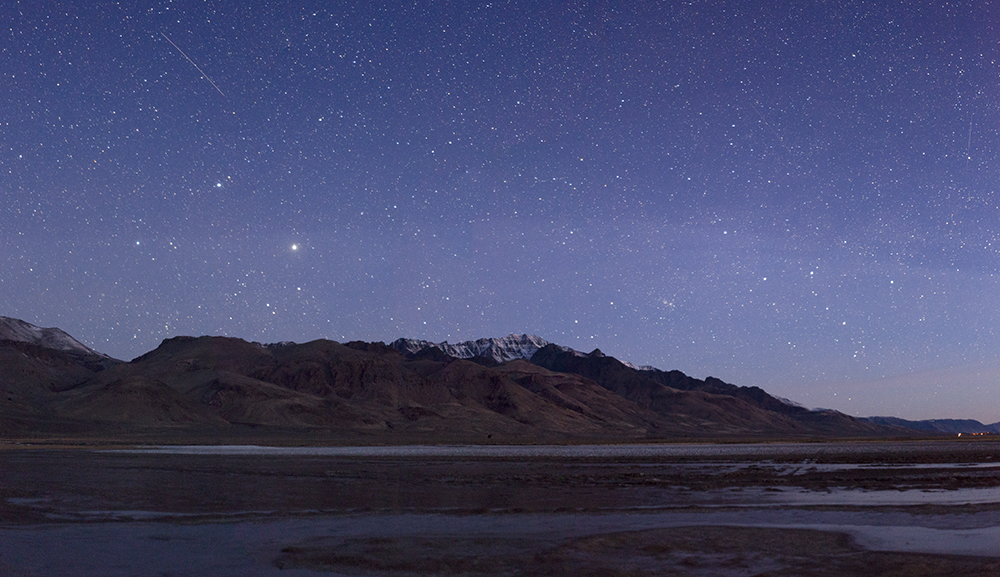 “The mountains form a ribbon of familiar landscape separating two vast spaces, blue haze above, a mosaic of cracked mud below. The desert almost seems to mirror the sky in size. It complements it and completes it.” -Stephen Trimble, “The Sagebrush Ocean” (1989)

Southeast of the Refuge lies the pancake-flat expanse of the Alvord Desert, an 84-square-mile former lakebed along the eastern escarpment of Steens Mountain. In much of the Great Basin, blocks of the Earth’s crust that fractured along fault lines have gradually tilted under their own weight, creating sloped mountain ranges that generally trend north-to-south. Steens Mountain is a striking example of this fault-block phenomenon: 50 miles long from north to south, its gentle western slope rising to 9,734 feet and dropping abruptly into the basin of the Alvord, more than 5,000 feet below.

Basin and range topography—those hundreds of north-south-trailing mountain ranges separated by broad, flat basins—owes its almost orderly appearance to the tectonic peregrinations of the Pacific Plate. Extending from approximately San Francisco to Tokyo and from Anchorage almost to New Zealand, the Pacific Plate is on a leisurely course headed due northwest, three inches a year, and the North American continent seems reluctant to let it go. As the Pacific Plate shears up and away from the continent, enormous cracks called normal faults split western North America’s crust into roughly parallel blocks, which tilt as one crustal edge slips beneath the other. An upwelling of magma beneath the stretched-thin crust helped to spread these blocks apart, giving rise to the Great Basin’s mounded convexity, in which the highest elevations lie at the basin’s center.

The ascending edges of these crustal blocks, now thrust up from the plain, become subject to an eternity of weathering processes: wind, rain, snow and ice. All the eroded sediment flows down into the gaps between faults, creating wide basins adjoining ranges. In days of yore these basins were filled with water, but few such lakes remain. Most are now dry, barren, leveled by millennia of alluvial deposits. These basins are some of the flattest areas on earth. 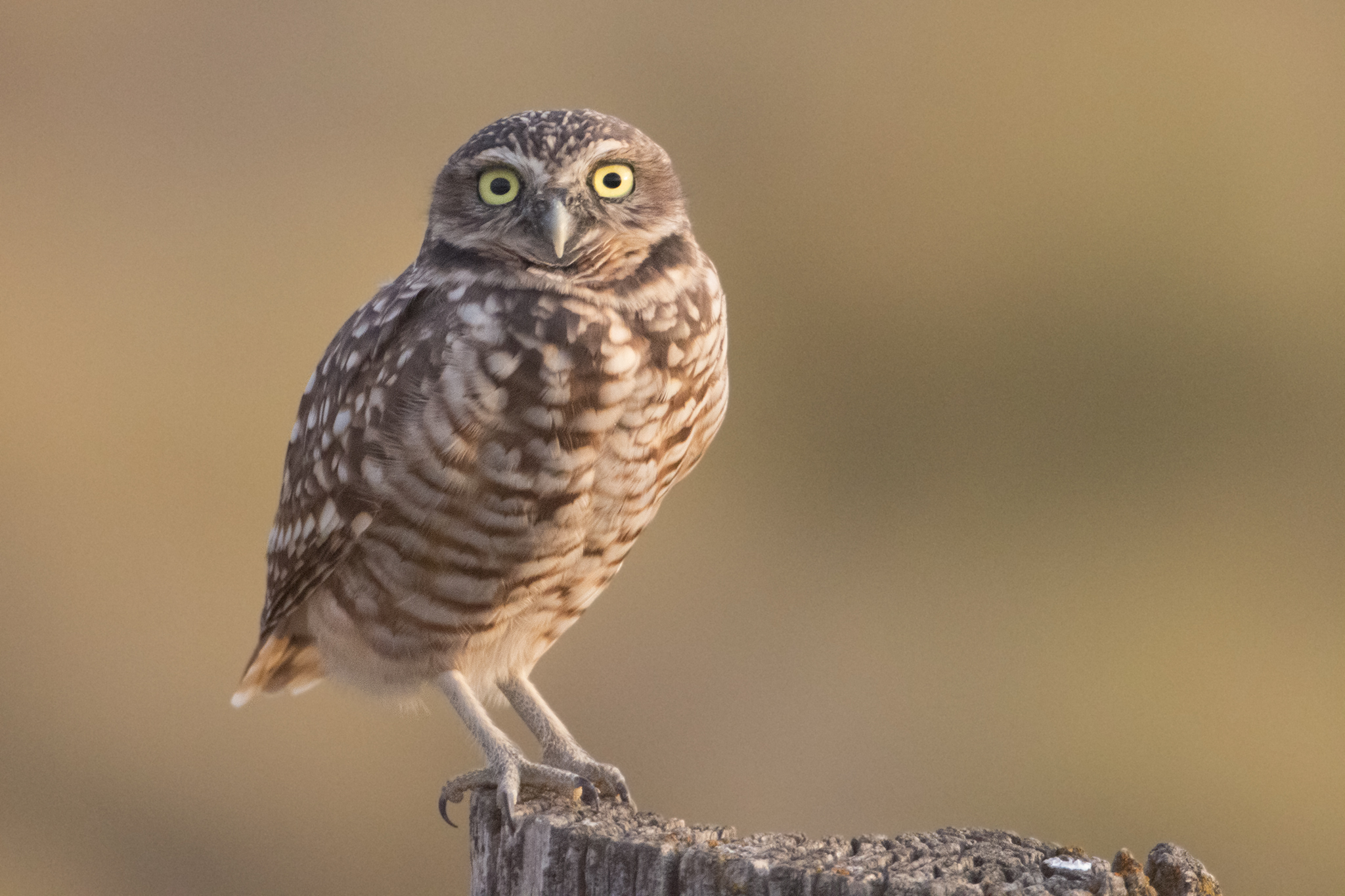 The Western burrowing owl (Athene cunicularia hypugaea) is a ground-dwelling owl that inhabits areas of short vegetation and bare ground, including deserts, grasslands and shrub-steppe across the West. In Oregon, they are usually associated with sagebrush-steppe, grasslands, pastures, roadsides, and other areas characterized by sparse vegetation and level terrain. East of Oregon’s Cascade Range, burrowing owls are known to breed in all or nearly all of Oregon’s counties, being most common in Wasco, Morrow, Umatilla, Malheur, Harney, and Lake counties.

Its common name refers to the fact that this owl nests and roosts in underground cavities. While capable of small amounts of earth-moving with their taloned feet, burrowing owls usually seek out the previously dug cavities of burrowing mammals (such as ground squirrels, kit foxes or badgers) in which to take residence and raise young.

Burrowing owls spend much of their time on or near the ground, where their spotted buff-brown plumage keeps them relatively inconspicuous as they stand outside their burrows or perch in low vegetation. Always alert to potential danger, the rounded heads of these owls swivel about fluidly, their bright yellow, forward-facing eyes constantly surveying their surroundings.

These small, long-legged owls—seven to ten inches from head to tail—prey on a wide variety of small animals including rodents, reptiles, amphibians and insects, which they capture with their feet and usually ingest whole. They sometimes employ a hovering flight to scan the ground below for prey; they also sally to the ground from perches to chase and capture prey on foot.

Unlike many owl species, burrowing owls may be active both day and night. In the height of summer, they tend to forage more at night, when temperatures are cooler. Similarly, their active period shifts to a more diurnal schedule as daytime temperatures drop in fall and winter.

Burrowing owls do not “hoot” in the traditional owl sense, but males give a two-note coo-coo song when courting a mate. Both sexes give a barking alarm call when intruders approach a nest burrow. When young burrowing owls are threatened, they retreat underground and make a harsh rasping or hissing sound. From the confines of the burrow, this sound very closely resembles the rattle of a disturbed rattlesnake and probably serves to deter predation.

During the Geological Exploration of the Fortieth Parallel, which began in northeastern California and went through Nevada to southern Utah from 1867 to 1872, the expedition’s then-teenaged ornithologist, Robert Ridgway, remarked that “Although the ‘Ground Owl’ was found at widely-separated places along our entire route, it was abundant at very few locations…Eastward of the Sierra Nevada we found it only at wide intervals.” That description is perhaps even truer today, as burrowing owl populations across western North America are seeing declines, primarily due to habitat loss from land conversions for agricultural and urban development, as well as habitat degradation and loss due to reductions of native burrowing mammal populations. 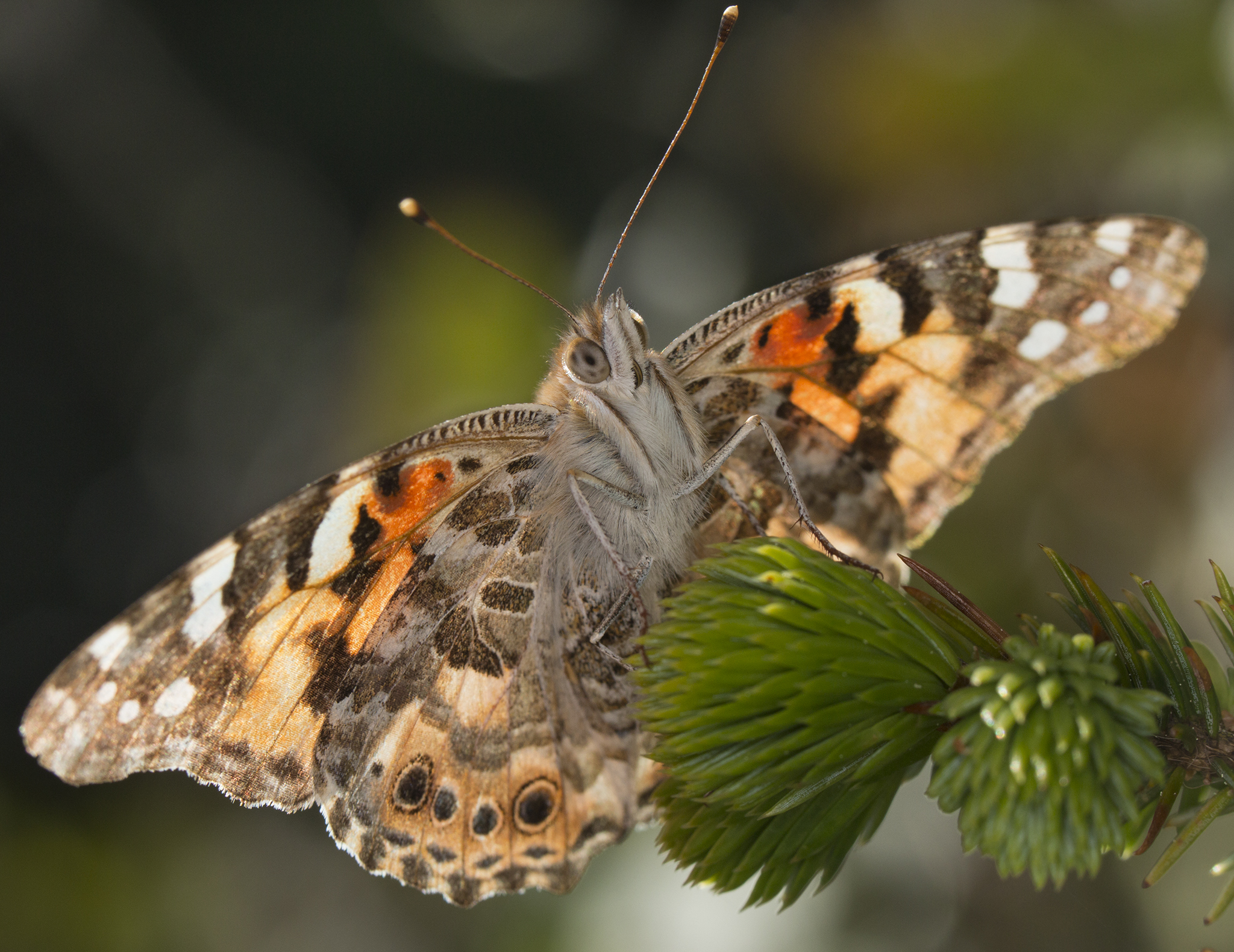 Perhaps you’ve seen a few of these butterflies recently, flitting about in your garden. Or perhaps you’ve seen hundreds, coursing along coastlines or crossing highways in steady streams, with many sadly meeting their ends splattered on car windshields and grills.

Measuring two inches from wingtip to wingtip, with black and white markings against an orange backdrop, these scale-winged insects are a familiar sight to people around the world. The painted lady (Vanessa cardui) is one of the most widespread butterfly species on the planet, found on every continent except South America and Antarctica.

In years of abundant winter rainfall, painted lady numbers can skyrocket, as early-blooming wildflowers provide nectar for butterflies and food sources for their larvae.

Like the famous monarch butterfly, painted ladies are migratory, following favorable conditions with the seasons. In the American West, these butterflies generally move in a north-northwest direction, leaving the Southwest and Mexico at winter’s end and traveling toward the Pacific Northwest with the onset of spring.

Painted ladies aren’t picky in their choice of plants to nectar on. Adults will use almost any plant in flower but they show preference for those in the Asteraceae family, including thistles. These plants are the butterfly’s hosts—their larvae eat leaves of asters and spin silken webs to protect themselves from predators.

Interestingly, painted ladies are known to breed and lay eggs in all seasons. A single year’s migration can involve several successive generations of painted ladies, each born and raised along the migration route.

It’s estimated that millions of these butterflies are migrating across North America this spring. Enjoy this natural spectacle while it lasts! 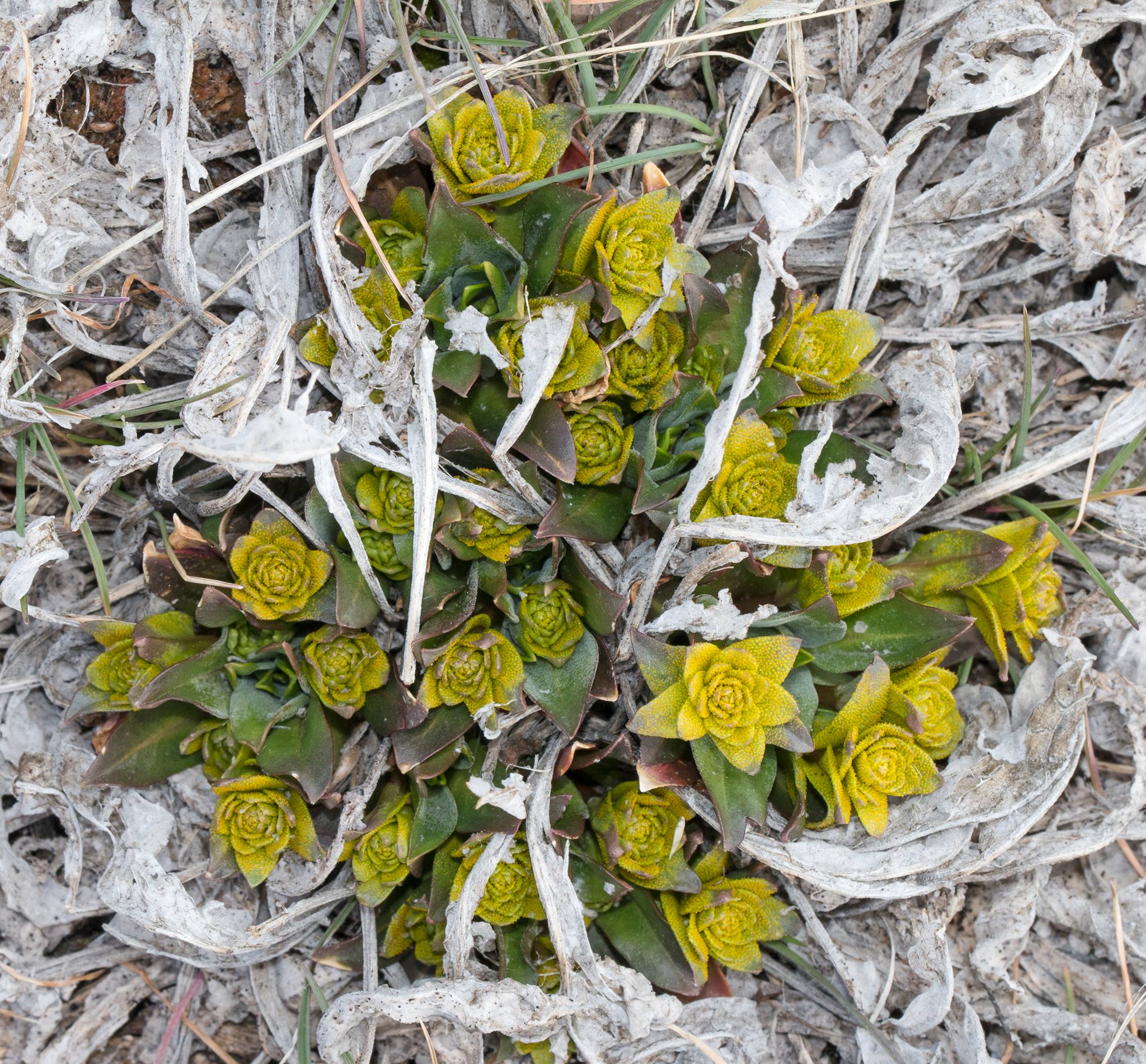