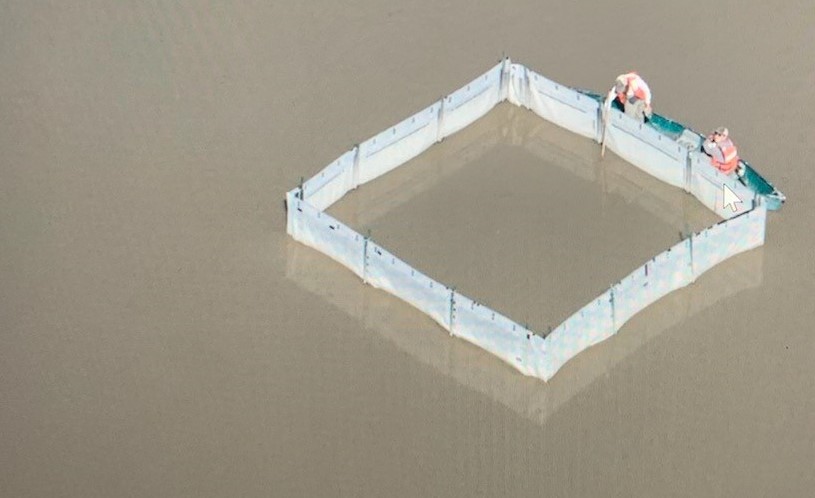 Ask anyone on refuge staff what Malheur Lake’s biggest problem is, and they’ll probably tell you it has a turbidity problem. For shallow lakes, there are two common classifications or states that they will exist in, clear or turbid. Malheur Lake has been in its turbid state for far too long, ever since the floods of the 1980’s. There are multiple issues of why it can’t change back to a clear state. One major issue is Malheur Lake has the inability to recruit emergent vegetation and submergent vegetation to block the winds and waves that frequently wreak havoc on the open water.

When the winds hit the open water it displaces the sediment on the bottom of the lake and swirls it back up into the water column. Along with the wind, the waves create this vast array of chocolate milk that is in a continuous cycle of suspended sediment that creates the turbidity on the lake. So one way to monitor this conundrum is a mesocosm.

One way a mesocosm is described is any outdoor experimental system that examines the natural environment under controlled conditions.

These were made over the process of a couple months and deployed on the lake in early April. There were ten total mesocosms with two being controls no treatments and two being references with no plastic. Out of the ten mesocosms, two had wind/wave reduction barriers and two had an experimental aluminum sulfate treatment added to them, and two had a combination of both treatments. Aluminum sulfate takes the suspended sediment in the water column grabs it and sinks it to the bottom.

With these mesocosms we are able to assess how much turbidity is being produced from wind/waves and how much turbidity is reduced from the aluminum sulfate treatment. We assessed these processes by taking light profiles to see if light reaches the bottom of the lake and deploying sondes inside the mesocosms to continuously collect turbidity data throughout the season. The light profiles gives us information to help restore submergent aquatic vegetation like sago pondweed. The sondes helped us identify if the treatments were working in real time. They take turbidity samples every thirty minutes.

These mesocoms have given us an insight for solving the turbidity problem of Malheur Lake. This is only year one of two for the mesocosm/turbidity project. You might be able to see these from the lookout tower next year.