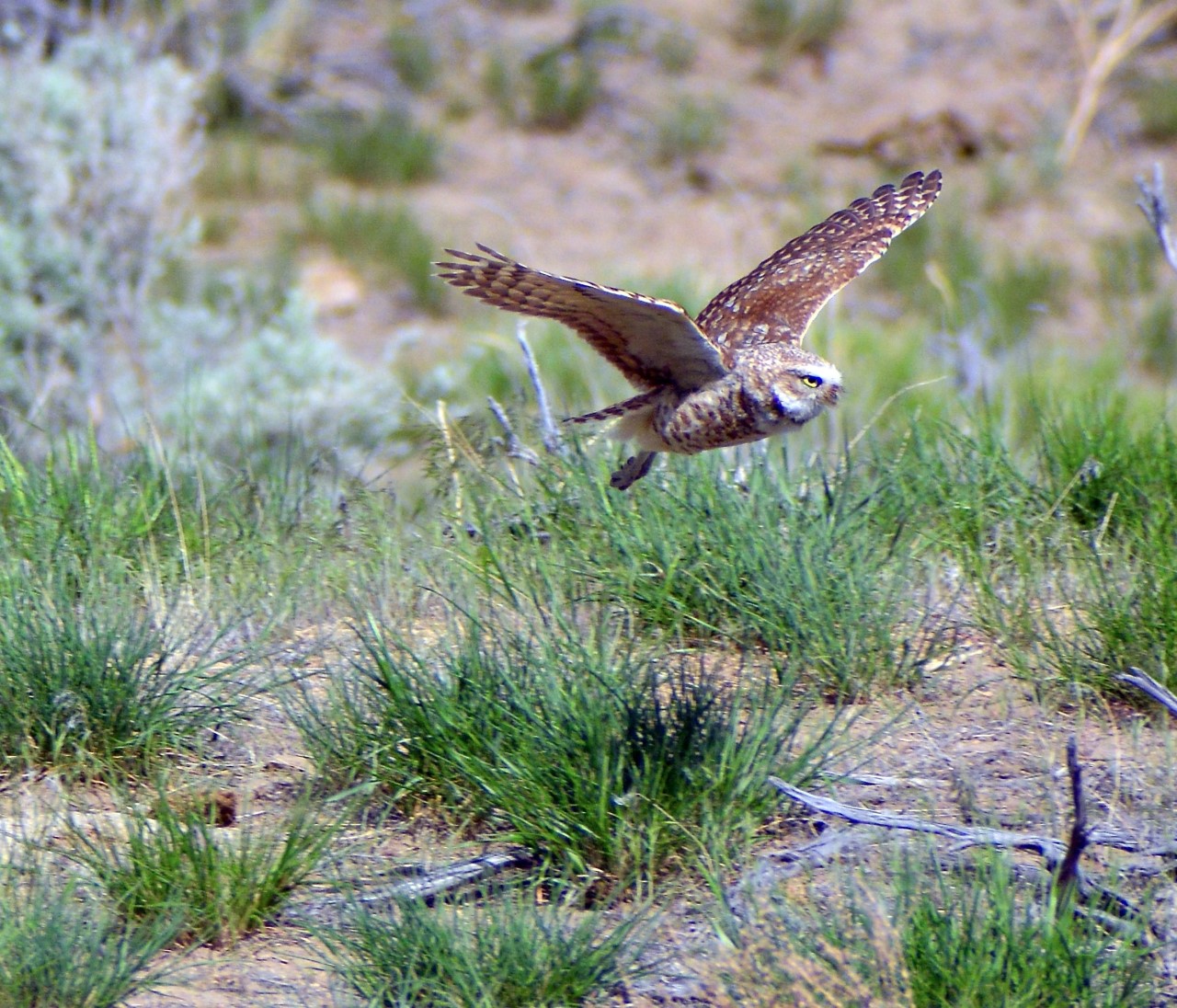 My wife Lorna and I are career wildlife biologists and ecologists. We belong to Friends of Malheur and enjoy working as volunteers at the Refuge.

Although we’re officially retired, Lorna is a member of Washington State’s  Fish and Wildlife Commission. I am the interim Executive Director of the nonprofit organization Western Wildlife Outreach,  which seeks to educate folks about our large carnivores and to advocate for coexistence with them. Our extended family loves Malheur NWR, and has been visiting this wonderful Refuge most years since the early 1980s.

Just 2 weeks ago, we returned from a wonderful week-long trip to the Malheur country with family members who are also avid birders and naturalists. BUT, we enjoyed a fascinating twist to an already great visit. After we’d set up our little RV camp in an appropriate area near the Refuge, a Burrowing Owl male showed up on our second evening to claim an abandoned badger burrow with a small colony of Belding’s ground squirrels right next door!  We were separated only by a fence and just 25 yards of the sparsely vegetated grassland which these beautiful little owls prefer for their nesting burrows.

That night, we went to sleep listening to the all night-long soft Cu-Woo, Cu-Woo, Cu-Woo calls of this dynamic fellow.  He was advertising forcefully for a mate. The next evening, the calls dropped off dramatically. We were worried he’d moved on. By mid-morning, he was standing watchfully at the burrow entrance as something in the burrow was sending small plumes of dirt into the air. Mystery solved a few minutes later as another beautiful little owl head popped up to look at us. His new mate was remodeling the home.

Over the following two days, we watched this confiding and active pair mate repeatedly at the burrow entrance. Pretty passionate stuff in one of the photos I’ve included. In the meantime, the male actively caught beetles and moths near the burrow, and later brought back at least one northern pocket gopher during deep twilight.

It was also very interesting to see the male bring back bits of aged horse and cow manure. His mate would later emerge from the burrow to select pieces of this to line the underground nest. This is a well-known feature of Burrowing Owl nest construction.

The females are known to lay six, eight or more eggs and to raise large broods. Many of the females begin to brood as soon as the first egg is laid and the young are born sequentially. During this time, the female drops mostly from view and the male rarely enters, but hunts day and night to provide food. This appears to have been happening during our last 2 days of our camp-out. Lots of views of the male, only a couple of fleeting glimpses of the female.

Despite their long legs and impressive wing-span, these are LITTLE owls. If you drink two cups of coffee in the morning, you’ve consumed more than the male and female weigh together (ave. about 6.3 oz apiece).  Also, unusual among the world’s owls and avian raptors as well, the male is typically larger than the female, as depicted in my accompanying photos. Nesting near humans may provide additional protection from predators. Red foxes in Oregon are known to use this strategy.

We all wish them well and hope this dynamic little pair are successful this year. If so, young should start to emerge over the next month. Due to habitat loss and many other factors, even, ironically, the killing of badgers (which are owl predators, but also provide their most useful nesting burrows) have led to dramatic declines in historic Burrowing Owl numbers on and around the Refuge and throughout their North American range.