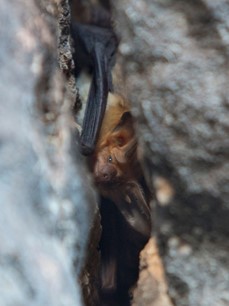 Pallid bats are one of the twelve species of bats found at Malheur NWR. Known for their distinct appearance with large ears and hog noses. They also have larger eyes than most species found in North America. These unique features not only give this bat its attractive look, but helps with their ground hunting style. Unlike most bats, they will catch food on the ground versus in the air. Besides the use of echolocation to help find its prey and maneuver through the air, they also use passive hearing to hear their prey move on the ground. Their diet consists of eating large beetles, crickets, grasshopers, cicadas, centipedes, and scorpions! That’s right, scorpions. What about the venom you ask? This species of bat appears to be immune to the venom of scorpions. Talk about a super power!

Because of their hunting behavior, this exposes the species to predators both in the air and on the ground, such as, coyote, foxes, owls, raccoons, snakes, and cats.

The geographic range of a pallid bat extends from Canada, throughout western America, all the way to Mexico. They can be found roosting in caves, rock crevices, mines, hollow trees, and buildings. Water sources are usually close by. Pallid bats do not migrate, except for short distances to winter hibernacula (a place where a creature seeks refuge, to overwinter).

Because this species is highly social, their colony roost can vary from 12 to 100 individuals. These bats tend to breed in the fall and have their pups in the spring. Pregnant females will most likely give birth to twins, but can have between one or three pups.

This species definitely adds to the unique quality of Malheur NWR.

If you’d like to see a pallid bat eat a scorpion, CLICK HERE to see this amazing creature in action.