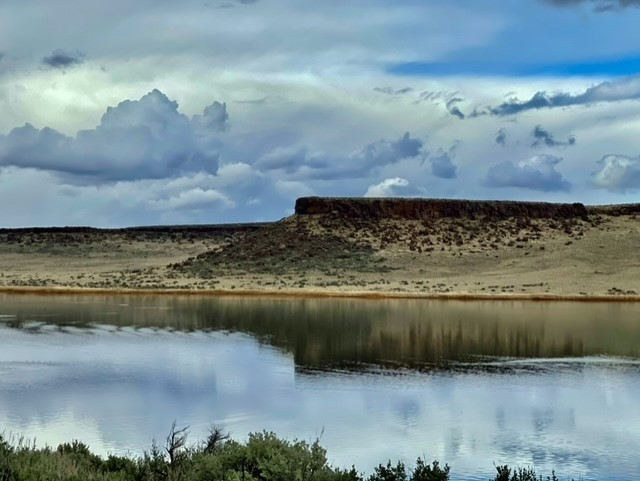 A change in weather always seems to be an invitation to bird. Having just returned from birding warm Arizona, a trace of snow and much cooler temperatures in Harney county provided that stimulus.

This is just a partial summary of the bird activity on Sunday, April 25, 2021 in Harney County, but captures some highlights. 197 bird species have been observed in the county this year so far and that number changes almost daily now as new migrants arrive almost daily now.

We woke up to a trace of snow and 32 white crowned sparrows and a record 78 Cassin’s finches in the backyard at feeders. Not one house finch, as Will Wright and Joan Suther helped me count.

Joan and I drove south from Burns, noting the Black-bellied plovers that were present on Hwy 205 just south of Hotchkiss lane had moved on, but they were replaced by long-billed dowitchers, dunlins, western sandpipers, and a peregrine falcon that had a high altitude encounter with possible second one. The Peregrine we watched continued hunting and kept shorebirds on guard while frequently flying between feeding areas.

One mile before Malheur National Wildlife Refuge HQ we encountered 27 willets in a small area feeding in the short green grass pasture and a great-tailed grackle. Or, were there two? Since one was reported at Refuge Headquarters.

We tallied 51 species at HQ, with the most notable species being a blue-winged teal and a great-tailed grackle that appeared late in the stay. I drove back to the first sighting location of that bird to see if we had two, but could not find the first one. I was leaning towards one for the notes until a birder said he took a photo of two at Crane’s Nest Nature Store feeder!

We pointed out a few notable species to out of area birders and spotted a short-eared owl hunting over the distant wetlands. This made their day.

A few days before this storm hit, reports of several Nashville warbles, and a handful of other early migrant warbler species were noted at HQ, but not today. The best we could do were just 4 yellow-rumped warblers and 1 ruby-crowned kinglets.

The Cranes Nest Nature Store at refuge headquarters is now open most days depending on volunteer help. The visitor center is partially open, again depending on volunteers. About 6 vehicles and 12 people were birding during our 3 hour stay. They decided a virtual bird festival, while vaulable, was not as good as the real thing. Some came from distant Ohio.

On to Krumbo reservoir for a possible common loon as a large storm cell approached. Surprisingly, the water at Krumbo was flat and glassy. Not a bit of wind for awhile. The calm before the storm.

At the dam I spotted a common loon about 400 meters out and then Joan spotted two more to the far left. Not bad for 10 seconds of birding. But for a thorough survey of water birds we knew a view from the sagebrush point at the boat landing was needed. It was there that things got exciting.

To my knowledge, the record for common loons was 7 by M. Archie on November 3, 1985. And the refuge record (and most likely the county record) is 24 on Boca lake, way back on May 11, 1964. (Data from Birds of Malheur by CD Littlefield). Ebird high count data does not capture all historical high count data and it can be misleading for the numbers that do exist.

While enjoying the reservoir view, dark gray clouds with bulging white edges approached from the SW as thunder rumbled over the Steens. Then the rain, sleet and snow hit about 5 pm as we drove back to Burns.

P Hill above Frenchglen had more than 1/2 inch of rain over the weekend while Burns had a trace. The drought continues and the Narrows remains dry. There is a chance that the snow on the Steens will provide water to the Narrows, maybe in June and if so hopefully it will remain into the fall for good shorebird viewing.

Idlewild campground is open because of the lack of snow.

We did notice that waterfowl numbers were low on the wetlands south of Burns including Snow and Ross’s geese. But diversity was good. A lack of flooded fields is most likely the reasons birds are not lingering here.

And a significant lack of black-tailed jackrabbits may be the reason the Golden eagles not nesting at the iconic nest just west of the Narrows.

Bald eagles are nesting at sodhouse and P-Ranch on the Refuge and may have an easier time catching waterfowl and the plentiful American coot.

This is always an exciting time of year here in the basin as new migrants and rare birds arrive daily from this point on into early June. Ebird is an excellent way to track new arrivals and numbers.

Burns had a near record high number of Covid 19 cases a week ago, so be safe and smart on your travels.

On another note, smash and grab theft is now occurring in Burns, even at well known motels. One birder lost some electronics while parked at one of well know hotels. And business break-ins are part of the weekly news lately.

The best advice: don’t leave valuables in your vehicle. All the theft that we know about is in Burns and Hines, and not at birding spots. Just be aware and safeguard your belongings.

Recent unique observations have included great-tailed grackles, a Bewick’s swan, semipalmated plover, a female ruff, and a calliope hummingbird. Don’t forget to check eBird for recent sightings. You can even sign up for rare bird alerts!