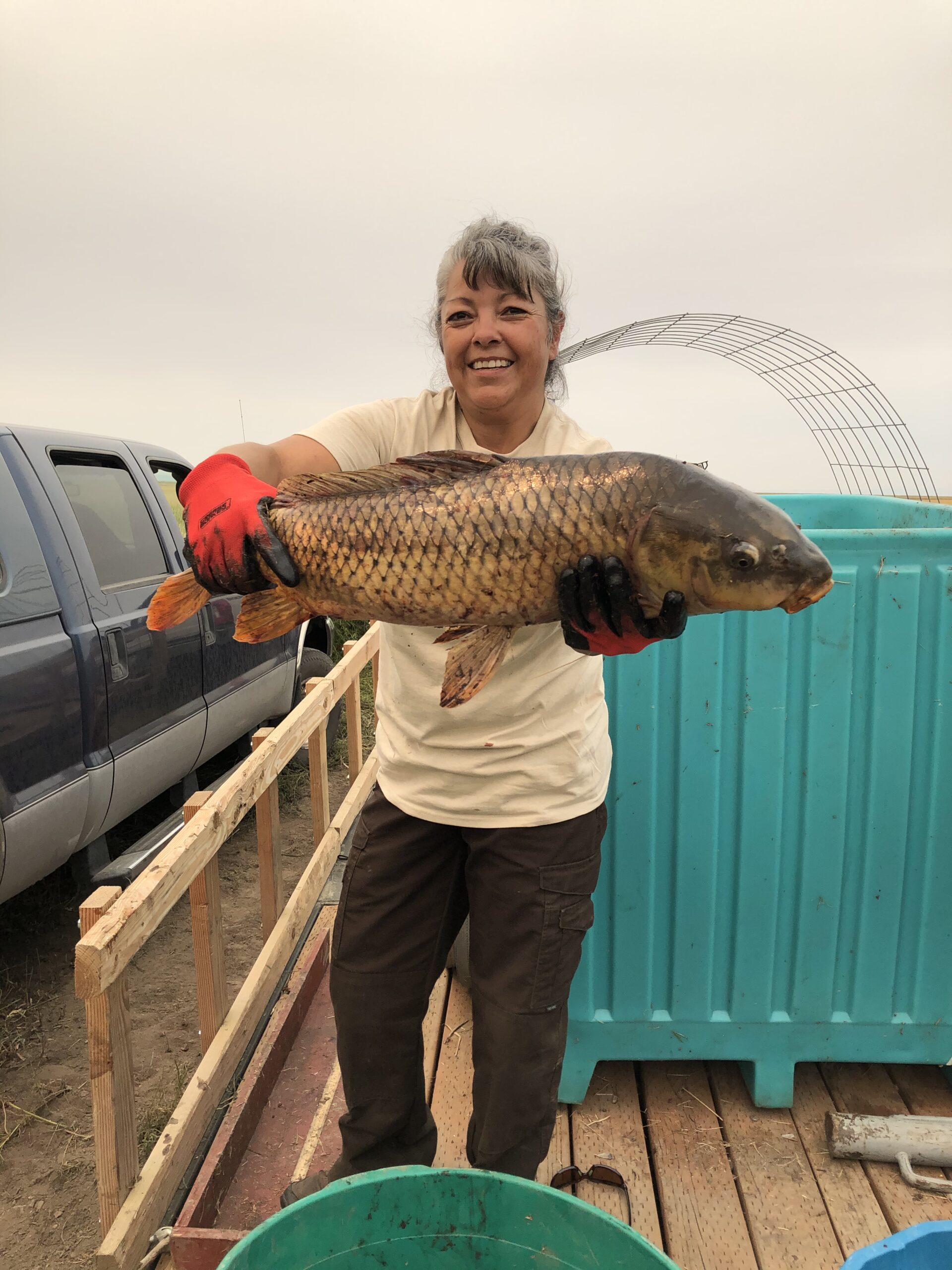 In the last article I wrote for Malheur Musings, I mentioned that we as a refuge are only at the beginning of a long term journey to restore the currently degraded state of Malheur Lake. On the ground research and modeling efforts have helped us understand that the current turbid state of Malheur Lake is being maintained by strong positive reinforcing feedback loops (i.e. bioturbation via Common Carp (Cyprinus carpio) and wind sediment resuspension), which are pulling the lake towards the turbid state. In order to shift Malheur Lake back to the historically clear state, a transformative effort is necessary, incorporating a combination of Common carp (hereafter “carp”) and wind-wave suppression, as well as restoration of emergent/submergent vegetation. To better understand the major mechanisms driving and maintaining the current turbid state, the MNWR has initiated three major collaborative pilot restoration projects: 1) emergent vegetation expansion and transplantation, 2) mesocosm water quality enhancement, and 3) carp radio telemetry, over the next two field seasons (2021-2022). It is our hope that the outputs from these collaborative research projects will help us identify the combinations of restoration actions necessary to not only flip Malheur Lake, but also maintain the clear state in perpetuity.

While all three of these projects will be essential to the eventual restoration of Malheur Lake, carp suppression is seen as the most difficult task ahead. With that being said, I wanted to give background on the Carp Radio Telemetry Project, as well as describe some of the actions that MNWR researchers will undertake over the next two field seasons.

As I mentioned in the last article, carp populations are very difficult to control due to compensatory density dependence, in which demographic rates (i.e. growth, mortality, and recruitment) shift in response to variations in the population’s overall density. In an effort to better understand the carp population in Malheur Lake, a carp population model (CarpMOD) was constructed to investigate removal actions. Ultimately, these results demonstrated that carp suppression should: 1) target multiple life stages, 2) take advantage of the natural mortality imposed upon the population by the surrounding environment (i.e. lake fluctuations), and 3) identify vulnerabilities within the carp population that can be exploited to increase removal efficiencies and mortality rates already imposed by the environment.

The Carp Radio Telemetry Project aims to identify vulnerabilities within the carp population that may be exploited via large scale removal actions. One such vulnerability that the Carp Radio Telemetry Project will investigate is the movement of carp from the lacustrine (Malheur Lake) environment into the riverine (Blitzen and Silvies Rivers) environments. For instance, anecdotal evidence suggests that carp in Malheur Lake move into the surrounding rivers to spawn in spring and for refugia habitat during low water years in late summer.

The spawning movement of carp in spring is likely motivated by their need for submerge macrophytes for successful spawning. Carp living in lakes at temperate latitudes similar to Malheur Lake begin to enter the river/lake floodplain habitat to spawn in spring as water temperatures rise above ≈17°C. Carp have adhesive eggs which must be laid onto submerged aquatic vegetation and/or inundated terrestrial vegetation. The inundated vegetation also provides protection for the eggs from wind-driven waves, which can dislodge the adhesive eggs sending the eggs to the substrate where they are smothered with sediment and are no longer viable due to low oxygen concentrations or physical harm.

In Malheur Lake, it is hypothesized that the carp enter the Blitzen and Silvies Rivers in spring to utilize the abundant submerged and emergent vegetation that is inundated due to the high flows. This hypothesis has been further validated by observational data collected during carp spawning surveys, in which MNWR Biologist float the lower portion of the Blitzen River and observed >250 spawning carp in early spring. However, in surveys conducted later in spring, zero carp were observed spawning, thus, anecdotally demonstrating a seasonal (spawning) migration that is temporary and likely driven by physiological and environmental variables.

Less is known about the carp movement in late summer, which is hypothesized to be driven by a need for refugia habitat as conditions become degraded in the lake due to low water levels and high water temperatures. However, previous studies have demonstrated that carp are sensitive to temperature changes which can affect their movement and feeding patterns, and thus forced to move to refugia habitat. One such refugia habitat is the Blitzen and Silvies Rivers, which while having lower flows, would potentially provide cooler water with increased food availability.

The Carp Radio Telemetry Project is a collaborative effort between the MNWR and the United States Geological Survey (USGS: Western Fisheries Research Center – Cook, WA). Over the next two years, our collaborative team will surgically implant and track 150 carp, setup and maintain ten stationary receivers (Figure 1) that will collect continuous data in a variety of environments (Malheur Lake – 5; Blitzen River – 3; Silvies River – 2), and conduct mobile tracking bi-weekly via airboats and canoes. Collectively, the data collected over the next two years will enable researchers to infer population-level behavior (i.e. habitat utilization and aggregations) both spatially and temporally. Ultimately, this project will provide novel insight into the behavior of carp in Malheur Lake, which then will be utilized by researchers and managers to exploit identified vulnerabilities within the carp population to increase removal efficiencies.

Figure 1. The green points roughly demonstrate the areas in which we will place stationary receivers that will collect continuous radio telemetry data.