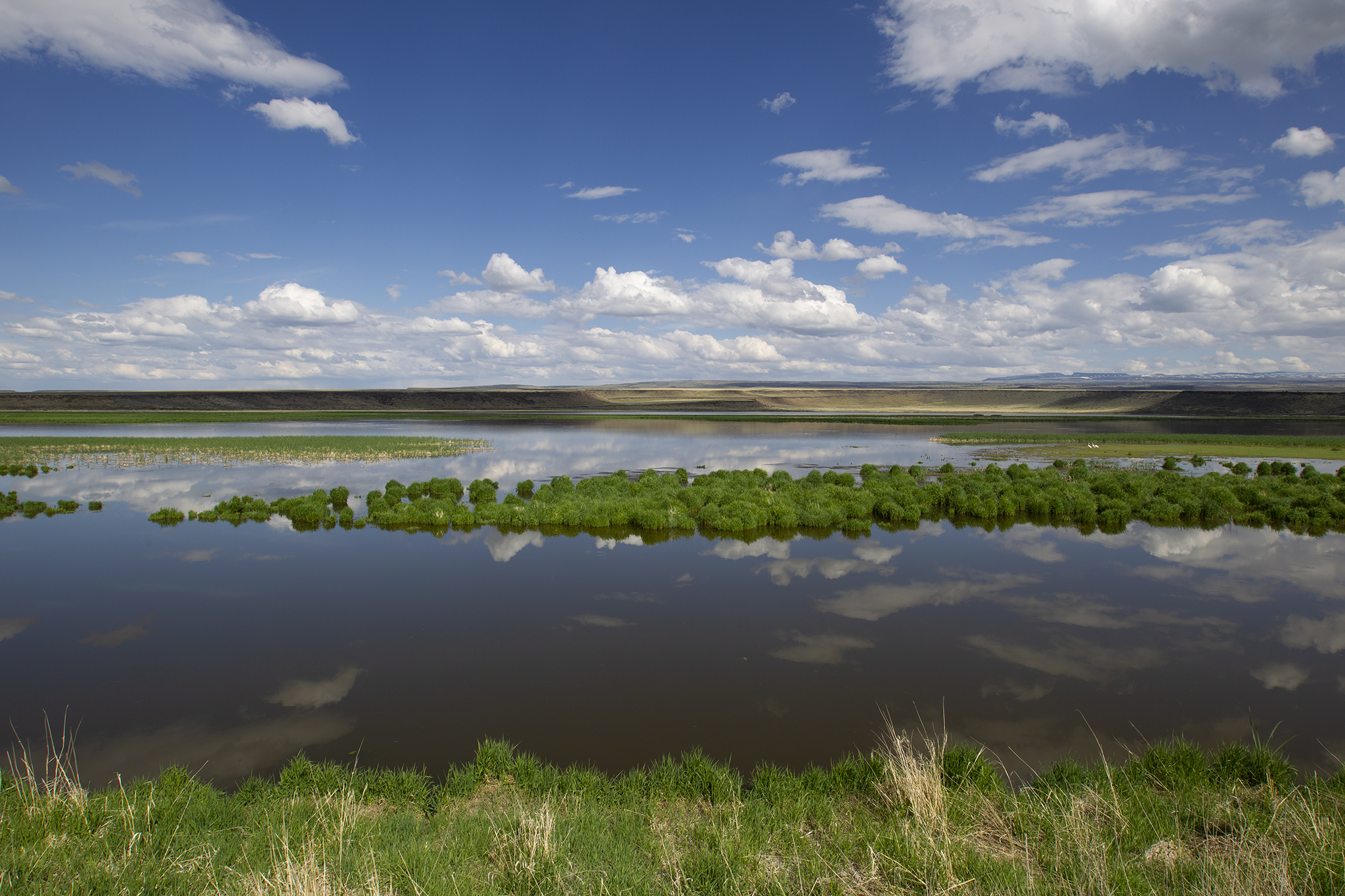 Sandhill Cranes are passing through, white-face ibis, curlew and other waterbirds have arrived at Malheur National Wildlife Refuge, and the refuge is ready for the breeding birds. Managing water for best uses at the Refuge looks straightforward in the Comprehensive Conservation Plan. But there are new or different variables every year, USFWS Wildlife Biologist Alexa Martinez explained. “We make our decision(s) based on the fields and ponds that have the highest priority for wildlife benefit and then to our haying program which also provides stubble habitat for other species of wildlife as well as hay for livestock. It may vary from year to year due to the amount of water we receive and how fast it comes down from the snowpack on the Steens. Usually the manager, biologist and maintenance crew get together to make a final decision by March 1, with a water plan for the year.”

One big challenge, said Maintenance Supervisor Ed Moulton, is moving the water from the southern end of the Refuge to the northern end. “We use canals, ditches and dams,” Moulton noted. “It’s very labor intensive. If it comes off the mountain gradually, that is good. When it comes off fast, that is not good, but we take it when we can get it.”

There are ponds, called impoundments, that hold the water when there is a good amount of precipitation in early spring. Last year was a good water year, with a good snowpack and plenty of precipitation in the spring, though the water did come off the mountain a little fast, creating a bit of a headache for water managers on the refuge.

By moving surface water throughout the Refuge by way of canals, ditches and dams, and by using flood-irrigation to create wet meadow habitat, there is diverse wetland habitat for nesting birds and for the millions of birds stopping over to rest as they migrate to more northern nesting grounds.

A benefit of spreading water across the desert landscape is the creation of wet meadows, or haying fields. Besides providing nesting habitat for meadow dependent species like Bobolinks, neighboring ranchers cut the hay in the fall, hay they can feed to their cattle. The resulting stubble provides forage for spring migrating birds as they fly north.

Throughout the Silvies Floodplain, and wetland habitat around the refuge, some area ranchers participate in the Harney Basin Wetlands Initiative, coordinating with conservation groups, land management agencies, and other stakeholders to maximize conservation benefits for wildlife and production benefits for agriculture. They primarily achieve these objectives through flood-irrigation, similar to the surface irrigation used by the Refuge According to Portland Audubon’s Eastern Oregon Field Coordinator and biologist Dr. Teresa Wicks, flood irrigation is time consuming and labor intensive for these ranchers,” she said. Using wells for irrigation can be less labor intensive, but may not be sustainable in the desert. “As groundwater is pumped out of the ground for agriculture, the water table has been drawn down. As the groundwater table has been drawn down, surrounding wells and groundwater dependent ecosystems have potentially been affected. “Conversion from flood-irrigation, using surface water, to sprinkler irrigation, using groundwater would remove habitat for migrating waterfowl and waterbirds,” Dr. Wicks added. “Surface water is important. For example, in years where less water makes it to Harney Lake, the lake becomes more saline. Brine shrimp and alkali flies can’t survive in water that is too saline. So in particularly low water years, this important food source for migrating and breeding shorebirds may not be available.” “Water management for ecosystems, the economy, and society are why collaboration with all the partners in the region is so important and will continue to be if predictions of future widespread drought, and increased climatic variability in the West are accurate,” she added.

Due to high amounts of water entering the system throughout 2019 parts of the refuge and surrounding areas are seeing benefits with remnant surface water from the previous year. Mid-February saw the spread of surface water from the lake to the Narrows wayside, which had been long hoped for over the last few years. Now, geese, ducks, and even pronghorn are visiting this oasis and are visible from the pullout on 205. We can only imagine the sheer magnitude of similarly vibrant and thriving habitats across the Refuge’s 187,000 acres.