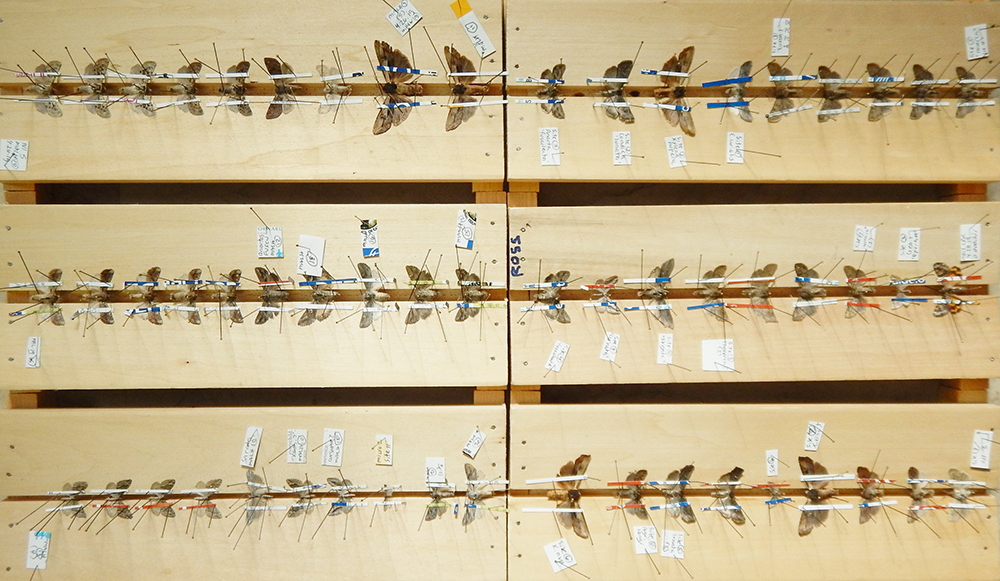 Sampling moths at a new site is always exciting.  The canvas is blank and every species documented is new for the checklist.  As the day wanes toward night and I turn on each blacklight trap, I wonder what will magically appear in the bottom of the bucket by morning.

On the first visit to Malheur in September 2012, I had no idea what I was getting into.  The 15 traps that I had placed throughout the various plant communities between the headquarters and the south end of the refuge generated a whopping 5,218 individual moths and over 100 species!  One of the biggest sample-processing challenges was separating several similar looking species of Euxoa noctuid moths.  I relied heavily on my mentor Paul Hammond’s keen ability to decipher subtle differences in wing patterns until I developed my own search image.

In contrast, this past chilly, wet April fellow lepidopterist Gary Pearson and I scattered 30 light traps throughout the refuge and were able to sample just 154 moths and 18 species for all traps combined. Surprisingly, the most abundant moth was the rarely collected Agrotis longicornis and 14 of those species collected were sampled for the first time.  Whereas the cool, wet weather appeared to have suppressed moth activity it did not keep us from making important discoveries.

County records are another way to evaluate the contributions of a moth study to larger scale species distributions.  As one who tracks such things for Oregon, I’ve been able to confidently claim that sampling the Malheur refuge has contributed at least 20 first time species occurrence records for Harney County.

Another essential aspect of a moth study is the acquisition of voucher material.  Vouchers are the physical pinned and labeled specimens which serve as evidence for one’s claims.  Whenever possible, at least one pinned specimen per species sampled is deposited into the Oregon State Arthropod Collection (OSAC) at Oregon State University in Corvallis.  A selection of Malheur moths are also displayed in the refuge headquarters natural history museum. Have you gone in and had a look? If not, please do!

Over 170 species of moths are now known from the Malheur National Wildlife Refuge yet that is probably only one-half of the species that actually occur there.  In Part 3 of this story I will discuss what is left to be accomplished to obtain a more fully robust baseline of the present-day moth fauna of the refuge and where you can learn more about moths if you are so inclined.  So, y’all come back now, hear?