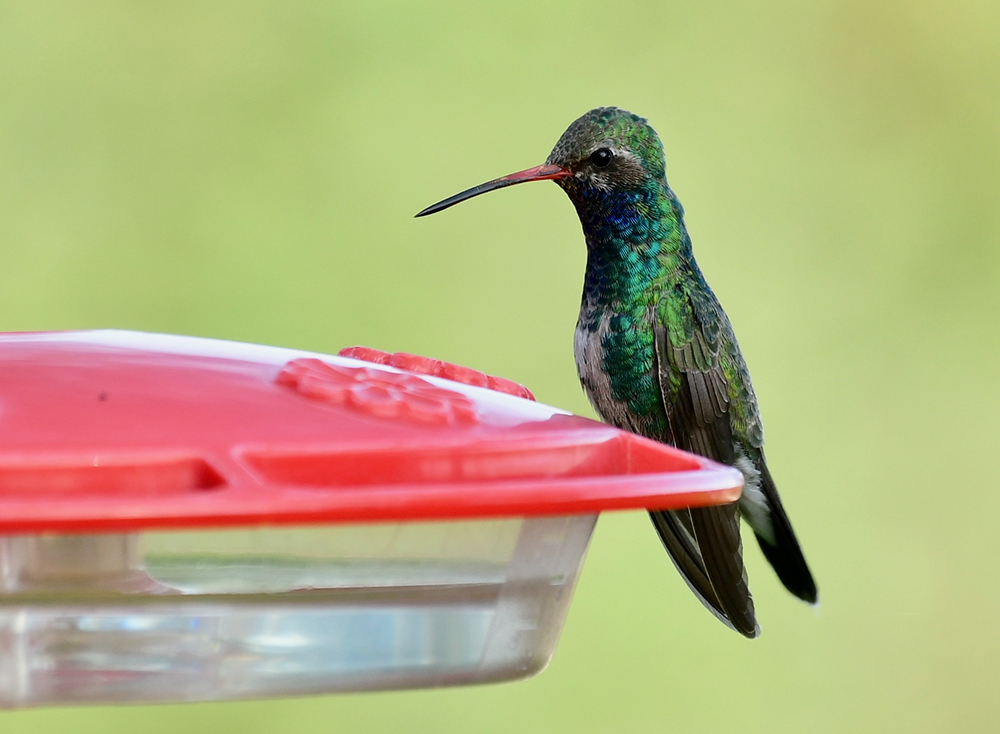 When Tim Rodenkirk, a botanist and well-respected avid birder from Coos Bay, made a road trip to Malheur NWR on Sept 14, 2019, he was hoping to relocate a rare bird sighting of a phainopepla at Page Springs Campground. He never did find it, but he found something better at his first stop at Malheur Refuge Headquarters. A small, brilliantly colored bird that has been documented over 99, 389 times in North America, but only twice in Oregon before this sighting: seen in John Day, September 12-14, 1998 and Clatsop, Oregon, October 6-14, 2001. A male Broad-billed Hummingbird! Aside from a combination of bright iridescent colors that will knock your socks off, it has a red and black bill the width of a two-by-four, broadest in the hummingbird world!

Once he posted his sighting, birding enthusiasts already on the Refuge were the first to enjoy its presence. As the news of the bird spread across the region, hundreds of birders from all over Oregon and parts of Idaho headed to Malheur Refuge over the next several days. Some drove all night. They were rewarded with views of a cooperative bird that enjoyed the diverse habitat at Refuge headquarters, fed at numerous hummingbird feeders and visited the new pollinator garden with red flowers and fresh nectar. He also feasted on the small insects in the trees and shrubs near the feeders at the Crane’s Nest Nature Center and Store.

This wandering species has been recorded as far north as Quebec City, Nova Scotia and the upper peninsula of Michigan, and has visited more than half of the states. Within the United States, the broad-billed hummingbird breeds in a small corner of southeast Arizona, and a sliver of southwest New Mexico, where it prefers riparian areas, wooded canyons, flower gardens and the occasional feeder. It also breeds and winters in Central Mexico, almost to Guatemala.