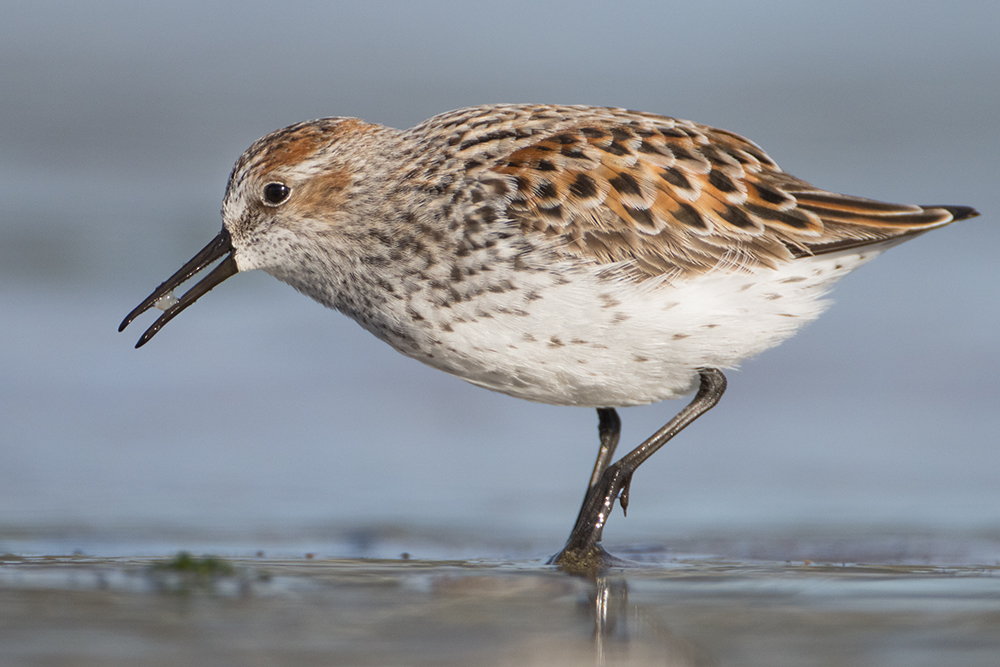 As summer reaches its peak in the Harney Basin, the enormous shallow expanses of Malheur, Harney and Mud lakes begin their annual contraction. By late July most of the snow on Steens Mountain and the southern Blue Mountains has melted, slowing the freshwater input to these terminal lakes. High temperatures and strong winds conspire to hasten evaporative losses from the surface; as the lakes shrink, hundreds of acres of mudflats are exposed. What looks like a barren expanse of goopy muck is in fact critical habitat for migrating shorebirds.

The saturated, fine-grained sediment of a mudflat is rich in tasty invertebrates: crustaceans, worms and mollusks by the acre. While most shorebird species probe the flats for these macroinvertebrates, it turns out that some—including dunlin and Western sandpiper—actually make their meals out of the mud itself. For them, it’s not what’s in the mud that matters most; it’s what’s on the mud.

On mudflats around the world, a veneer of single-celled algae (diatoms, to be more specific) and bacteria known as biofilm coats the surface of the mud. This photosynthesizing matrix of microbes, bound together by a mucous-like carbohydrate, provides the foundation of all life in the mudflat. The diatoms oxygenate the shallows and sequester carbohydrates and fatty acids. These energy-rich algae are then consumed by zooplankton and everything on up—including Western sandpipers and dunlin. The tongues of these shorebirds even sport keratinous bristles to help lap up the diatomaceous goo.

A study conducted in the Fraser River Delta of British Columbia found that biofilm comprises almost 60 percent of the diets of dunlin and Western sandpipers wintering there. But the Fraser River mudflats are no sure thing: Areas where biofilm is most concentrated are being considered as sites for new shipping terminals—a change that may pose serious risks to migrating shorebirds. This loss of intertidal mudflats to development or sea level rise is occurring across the globe; a study published in the journal Nature in early 2019 found that the extent of mudflats in some countries declined by as much as 16 percent from 1984 to 2016.

The loss of mudflats is but one of many challenges facing shorebirds today. Due to a range of factors, from habitat loss or degradation at wintering and breeding grounds, to delayed prey abundance as a result of climate change, shorebird populations across North America have declined by an average of 70% since 1973. Species that breed in the Arctic, such as the aforementioned sandpipers, are among the hardest hit.