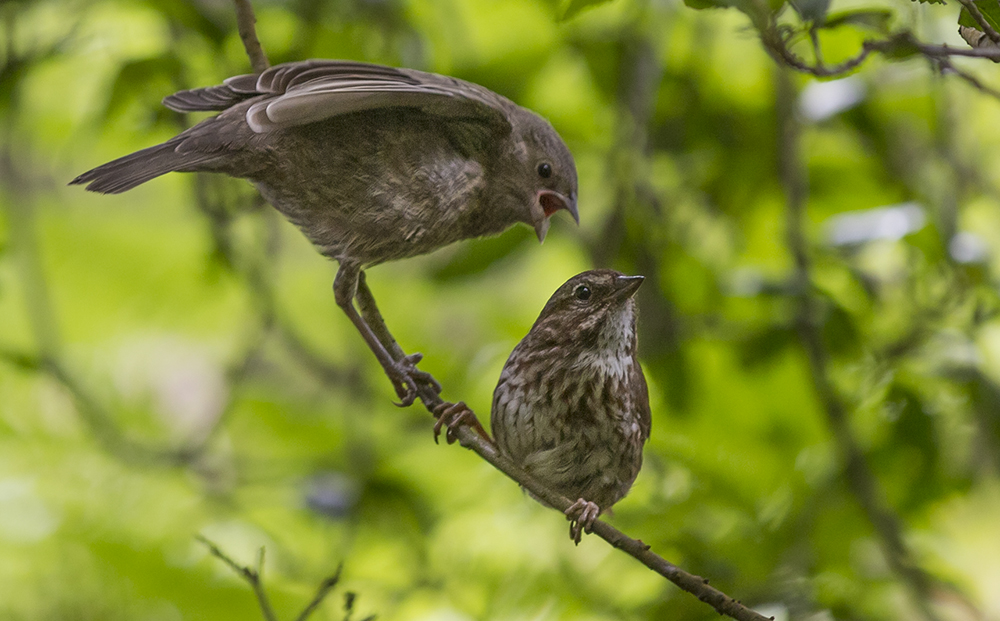 Something about this scene doesn’t quite match up. The fledgling bird, at left, is already larger than its “parent” the sparrow, and its bill shape and overall build are slightly different. That’s because the fledgling is a brown-headed cowbird, a relative of blackbirds and orioles that relies on other species to raise its young.

Native to much of North America, Brown-headed Cowbirds are adapted to life in open country: grasslands, prairies and agricultural areas. They typically associate with herds of herbivorous quadrupeds, following them through the seasons and eating the insects and seeds exposed by their foraging. Centuries ago, these quadrupeds would have likely been bison; today, cattle, horses, sheep and other domestic stock fill the niche.

Cowbirds take to this itinerant lifestyle so completely, they won’t let even reproduction keep them tied down to one spot. Instead of building a nest, female cowbirds lay their eggs in the nests of other species, a behavior known as brood parasitism. More than 220 bird species are known to be parasitized by cowbirds in this manner.

All of the incubation and chick-rearing is performed by the host parents. Some species are better than others at spotting the “dupes” in their nest and ejecting them; others suffer significant chick mortality as the aggressive cowbird chick—often growing much larger than the host chicks and even the host parents—crowds the nest and receives the lion’s share of food. Song sparrows, as it turns out, are particularly susceptible to cowbird parasitism.