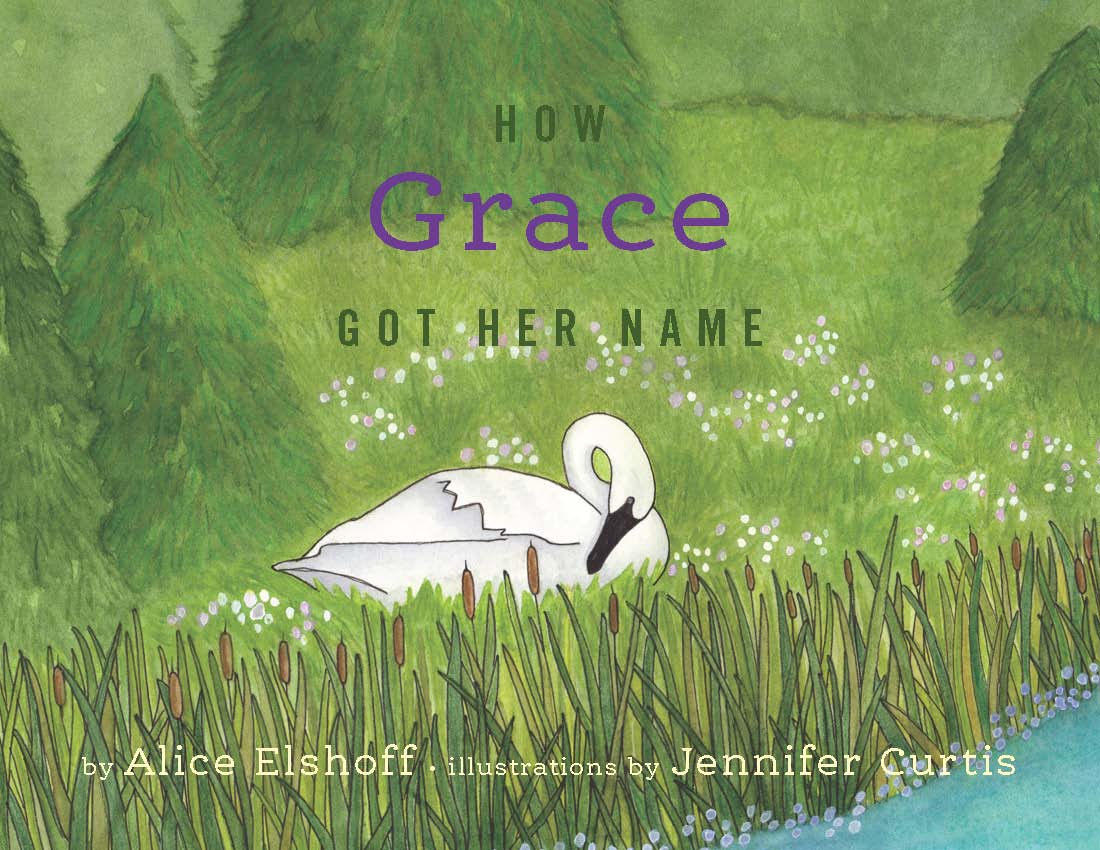 Grace is not just any trumpeter swan, she has quite the story to share! We are proud to announce that FOMR Vice Chair, Alice Elshoff, has just had a part to play in the beginning of Grace’s story and even now, as she has just penned How Grace Got Her Name. This children’s story book has been stunningly illustrated by Jennifer Curtis and published locally through Moonglade Press in Bend, OR. Alice shares with readers the trouble that Grace finds herself along the Deschutes River in downtown Bend and the trials she endures alongside a community of people that set themselves to task in helping her survive and thrive.

Even more impressive is that Grace is but one swan of a much larger story for trumpeter swans. Young produced by Grace and her new mate will be released into the wild at Summer Lake Wildlife Area to help build a self-sustaining trumpeter flock as her two past broods were. Grace is owned by The Trumpeter Swan Society and hosted by Sunriver Nature Center, in a partnership aimed at building the wild population of trumpeter swans in SE and South-Central Oregon. The Trumpeter Swan Society and its other partners, Oregon Department of Fish and Wildlife (ODFW) and Malheur National Wildlife Refuge (MNWR), have been working to expand breeding trumpeter swan numbers and distribution in south-central and southeast Oregon since the 1990s with what’s called the Oregon Trumpeter Swan Restoration Project.

In the late 1930s through the 1950s trumpeter swans were released at MNWR to restore this once present Oregon species. The first nesting occurred in 1958 and the MNWR trumpeter swan flock slowly grew until its numbers peaked at 19 breeding pairs and a total of 77 individuals in 1986. Flood conditions in the mid-1980s reduced their productivity and allowed high numbers of common carp to invade traditional MNWR wintering sites and reduce aquatic food supplies, resulting in degraded wetland conditions and a declining trend in swan numbers. Shortage of winter food caused by degraded wetland conditions and low recruitment were the primary factors limiting the population and these problems were compounded by the sedentary behavior of the flock. The MNWR flock has persisted to the present, though the flock is currently very small (4 adults) and is in danger of local extinction. MNWR still provides excellent sites for breeding trumpeter swans; however, the wintering area in the south Blitzen Valley that the flock is imprinted on is marginal and likely limits the carrying capacity of the refuge for the existing flock. In recent years, brood survival has been minimal, likely due to reduced water availability in the Blitzen Valley.

Although the project originally began in 1991 and some progress was made on establishing a new flock focused on Summer Lake Wildlife Area, the project was halted in 1998 due to political concerns. Unfortunately, most of the new breeding pairs established from the 1990s releases were gone by the 2009, when restoration efforts were restored. Since 2009, 9 new pairs have nested in this region, which fledged a total of 17 wild hatched cygnets. We are hopeful that Grace’s young will survive to breed in the wild and contribute towards a self-sustaining trumpeter swan flock in Oregon.

Friends of Malheur National Wildlife Refuge supports the Oregon Trumpeter Swan Restoration Project by contributing to The Trumpeter Swan Society as a member.