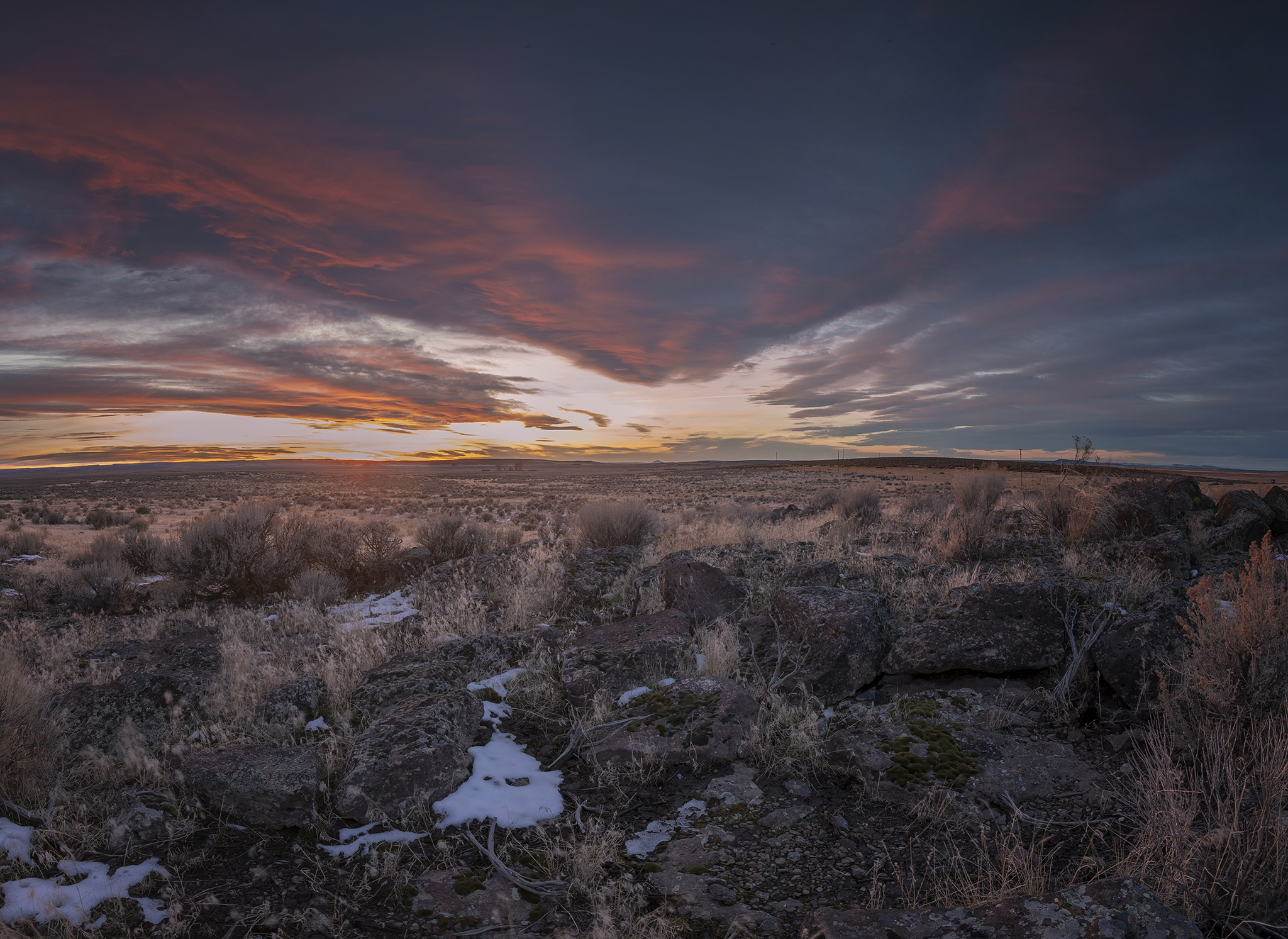 As most of Malheur Refuge’s wildlife takes leave for the season, as many of the shrubs and grasses die back or slip into winter dormancy, the arid landscape is laid bare, somehow emptier and more desolate than before. But the grand architects of this high-desert ecosystem remain in place as they always have, humble and unassuming, right below your feet. They are known as cryptobiotic soils, or microbiotic soil crusts.

The organisms largely responsible for fostering desert ecology are not charismatic. Outwardly, their appearance does little to suggest importance in any capacity. They are not showy; they do not burst forth in flower, brighten hillsides in their profusion, or otherwise attract the eye to their presence. They scarcely rise more than a few centimeters off the ground. But they are everywhere. In fact, if you’ve spent any time at all exploring the Harney Basin shrub-steppe, admiring its spartan flora and fauna and puzzling apart the underlying glue that holds this ecosystem together, you’ve probably trod all over them.

Fragile, slow-growing and long-lived, these soil crusts are assemblages of minute organisms living commensally, a chunky mix of cyanobacteria, fungi, lichens and mosses daubed almost uniformly over the desert. Almost every undisturbed patch of non-wetland, non-bedrock substrate in the basin boasts a layer of crust, the expanse sometimes constituting thirty to forty percent of a given area’s biomass. Like most soils on earth, they are very much alive. Also like most soils, they serve absolutely essential functions in sustaining ecosystems, literally supporting them from the ground up.

Perhaps the most influential constituents of this living crust are the cyanobacteria. Unicellular, possessed of photosynthetic powers, these primordial lifeforms have a storied past on this planet, namely due to their pioneering role in colonizing its nascent landmasses some three billion years ago. At that point, earth’s atmosphere was devoid of oxygen. Not a single air-breathing organism lived above the waves. Born of the sea like all else, certain species of cyanobacteria washed ashore and slowly adapted to the environs, finding loads of carbon dioxide, methane and nitrogen in the newly-minted atmosphere. Under an intensely burning sun, they began photosynthesizing en masse, converting carbon and water and sunlight to sugar and fresh air. For eons they breathed life into the void. Without cyanobacteria, there would have never been any accumulation of atmospheric oxygen on earth, and hence no terrestrial life as we know it. Their expirations paved the path from sea to shore, a groundbreaking happenstance that changed the world forever.

In the desert, cyanobacteria pump out oxygen as they always have, but their keystone function is one of cohesion. That is, keeping the friable desert soil from blowing or washing away. This they accomplish by binding particles to form clods, in much the same way a plant’s root system clumps dirt together, thereby slowing erosion. These types of colonial cyanobacteria occur in filaments, essentially gossamer strands of cells strung between soil specks. When wet, these bacteria navigate the soil’s porosity, twisting and tunneling and expanding their colonies, dragging their filaments between particles like a snail’s trail of slime. As the soil dries, so too do the filaments, resulting in a rigidized, weather-resistant mass. These filaments retain their hold long after the bacteria die, and can sometimes penetrate several inches below the soil’s surface. Water is soaked up by these filamentous accretions. Various nutrients and other fertilizers are trapped in the crust’s corrugated surface. The bacteria build the soil; the xeric plants take root.

Also of importance is the cyanobacteria’s fixing of nitrogen, a trick vascular plants have yet to master. The bacteria pull nitrogen gas from the atmosphere and sequester it in the soil, where it is available to searching roots. In nutrient-poor desert soils, much of the nitrogen present is put there by bacteria. It is a limiting factor to the plants’ growth. Without the crust, there would be few plants, and without plants, there wouldn’t be much around but rocks and dust.

Alas, the living crust is almost unbelievably delicate. Footsteps and truck treads and cattle hooves wreak havoc on the dormant colonies, the damage sometimes taking decades to repair. And as soon as the crust is broken, erosional processes go to work: soil dries up, breaks apart and is blown or washed away, opening rifts that weaken surrounding colonies and can eventually kill plant communities through drought or lack of nutrients. The area loses its soil stability and capacity for water retention. Desertification sets in. It is a brittle thing, this cryptobiotic crust, and the living desert depends on it.

There is a memorable U.S. Forest Service poster exhorting hikers to stay on trails, a plea for wildflowers that pertains equally well to soil crusts. Under the slogan, “Wildflowers grow by the inch and die by the foot”, it depicts a hiking boot coming down on a blossom, about to snuff out its life. If anything, cryptobiotic crust is even more fragile—so watch your step as you traverse the shrub-steppe. You’re walking over the groundwork of terrestrial life itself.