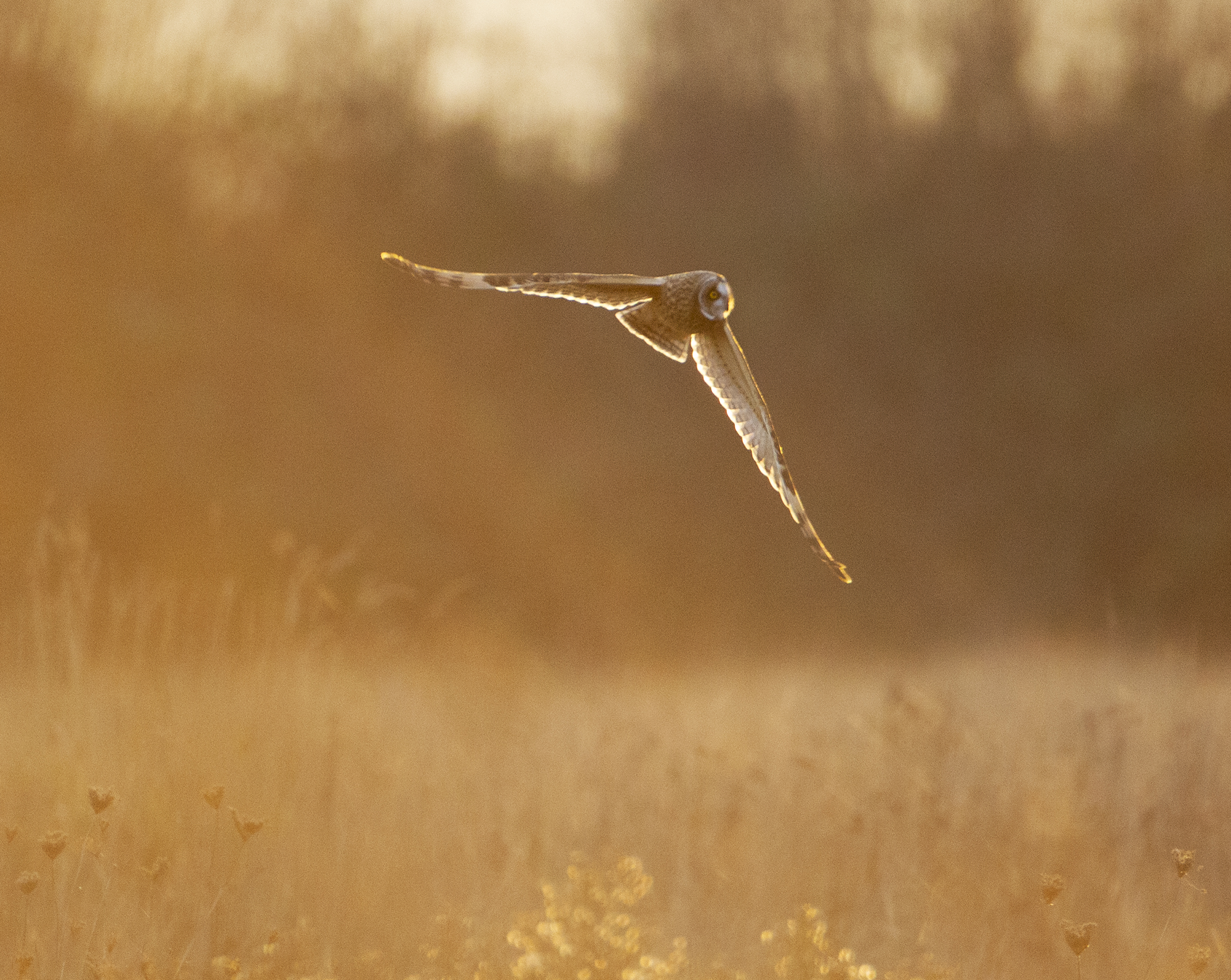 The short-eared owl (Asio flammeus) is a cosmopolitan bird of the open country, found in marshes, grasslands, shrublands, and tundra across North America and in similar habitats around the world. With cryptic plumage streaked in shades of tan and brown, this owl blends in perfectly with its surroundings, particularly when perched on or near the ground. Its common name refers to the sometimes-visible tufts on either side of its rounded head, which are thought to aid with camouflage and non-vocal communication between owls.

Short-eared owls are predominately a crepuscular species, actively foraging for mice, voles, and other small prey in the dim hours of dusk and dawn. While hunting, short-eared owls employ an erratic, buoyant flight—looking almost like an owl marionette—floating low over the ground, wheeling sharply about, listening intently for prey below. Their long, broad wings make hardly a sound as they crisscross open areas in the gloaming. If telltale rustling reveals a rodent underwing, the owl stoops, banks and dives into the grass, often emerging empty-taloned but sometimes coming up with a mouse or vole.

The beautiful, elaborate courtship displays performed by male short-eared owls during spring evenings are a sight to behold, complete with wing-clapping and hooted songs. In North America, this ground-nesting species breeds in open areas across the northern United States and Canada, including at Malheur Refuge. Local abundance is often tied to rodent populations: In years of high rodent production, short-eared owls can be particularly numerous at the Refuge, while in low years the species is virtually absent. Most short-eared owls overwinter in the United States and Mexico; a few have been known to remain at Malheur Refuge all year.

While widespread and commonly observed, this species is suffering population declines largely due to habitat losses to agriculture, livestock grazing, recreation, and development. According to the Western Asio flammeus Landscape Study (WAfLS)—considered the largest short-eared owl project in the world, spanning eight western states—short-eared owl populations are experiencing long-term, range-wide, substantial declines in North America, and the National Audubon Society Climate Program has classified the species as “Climate-Endangered”.

Efforts are underway to monitor this species in eastern Oregon. Klamath Bird Observatory partners with WAfLS to assess population status, trends, and threats against the short-eared owl; last spring, WAfLS launched its first set of short-eared owl citizen-science surveys in Oregon, with many of the survey locations near Malheur Refuge. You can read last year’s survey report here.

If you’re interested in making a valuable impact as a citizen scientist, sign up and participate in a WAfLS survey near you! Participating only requires two visits and many of the survey locations are close to Malheur Refuge. Visit the website for details and contact your Oregon state coordinator with any questions.