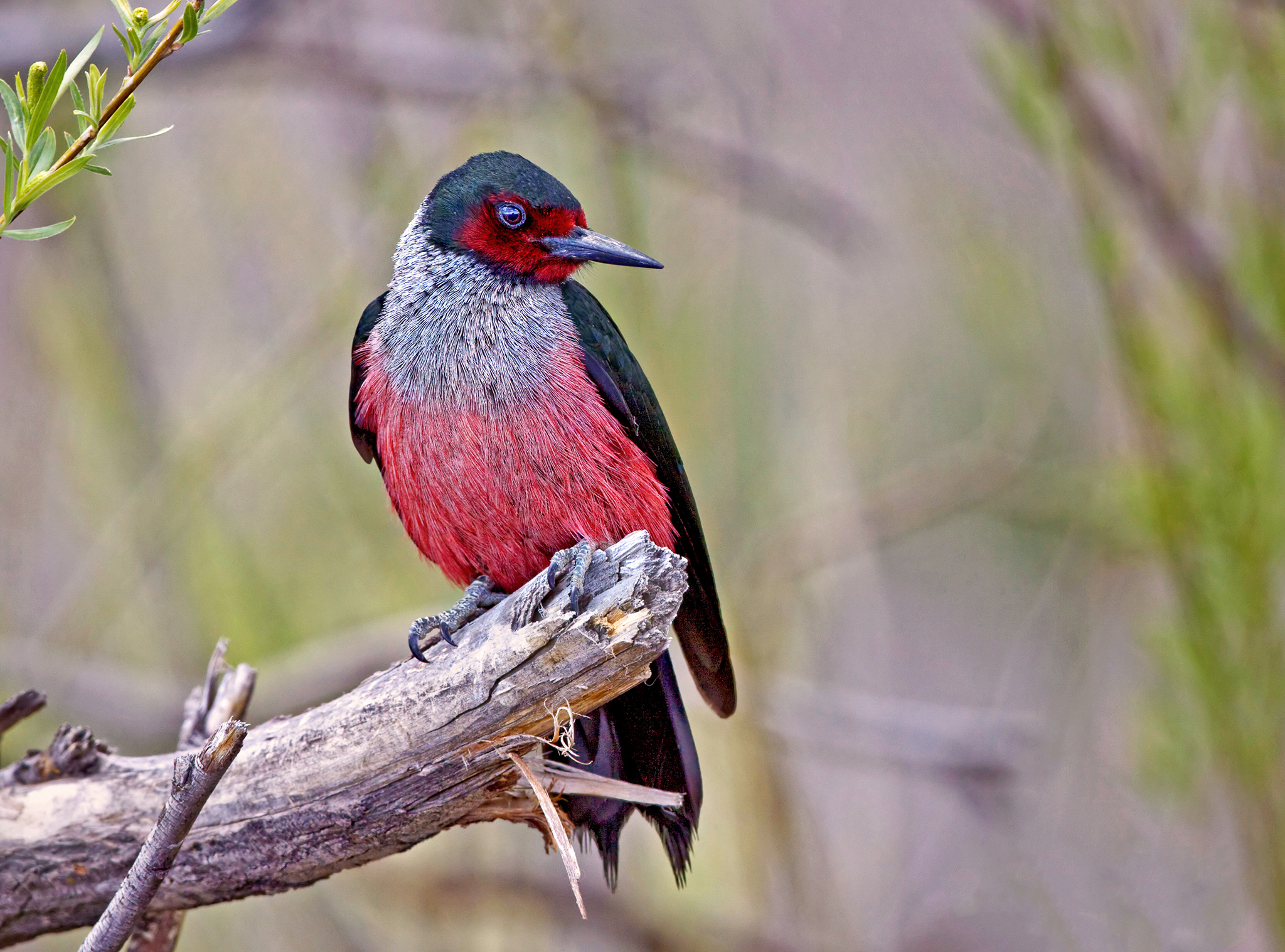 Besides gnarled Western junipers, non-native Russian olives and the occasional grove of Fremont’s cottonwood, there are few real trees to be found at Malheur Refuge. Despite this, five woodpecker species show up regularly at scattered locations throughout the Refuge, often associated with those intermittent stands of trees. One of those species is the Lewis’s woodpecker (Melanerpes lewis), an anomaly in an already distinctive family of birds.

Lewis’s woodpecker is fairly big for a woodpecker, intermediate in size between a robin and a crow. The adult plumage of both sexes is a unique mix of greenish-black above and pinkish below, with a gray collar and dark red face. Like other woodpeckers, this species has stiffened tail feathers and zygodactyl feet, which help them move about on vertical tree trunks. Their bill is stout and tapered like most woodpeckers’ bills, if a tad thinner. But a couple of behavioral adaptions make the Lewis’s woodpecker stand out from its congeners.

First is their flight. Unlike the undulating tack adopted by most woodpeckers, the Lewis’s practices a slower, more direct flight, often punctuated by short glides. Their size, dark coloration and flight pattern are reminiscent of a crow—as is their willingness to fly across open country, instead of from tree to tree as with most other woodpeckers.

Second, in spring and summer the Lewis’s woodpecker forages like a flycatcher, sallying forth from branches, wires and posts to capture insects in flight. Their aerial agility rivals that of flycatchers as well, complete with sharp banks, sudden turns and thrilling bursts of speed. Lewis’s woodpeckers also glean insects from tree bark, but rarely do they engage in the stereotypical woodpecker habit of excavating dead wood for boring invertebrates. Their diet switches to fruit and seeds in winter, particularly acorns, which they stash in the corrugated bark of trees such as cottonwoods.

This woodpecker’s habit of flying about conspicuously did not escape the notice of Meriwether Lewis, who first encountered the bird in Idaho during the summer of 1805 while on the famous Lewis and Clark expedition. “I saw a black woodpecker (or crow) today; it is a distinct species of woodpecker; it has a long tail and flys [sic] a good deal like the jay bird,” he wrote in his journal. Years later, working with skins brought back by the expedition, the ornithologist Alexander Wilson formally described the species and named it after Lewis.

At Malheur Refuge, Lewis’s woodpeckers are seen during spring and fall migration, moving along a southwest-northeast corridor between breeding and wintering areas in forests beyond Harney County. Oftentimes these woodpeckers are more numerous at the Refuge in fall than in spring, and the height of their fall migration occurs in September, rarely extending into early October.