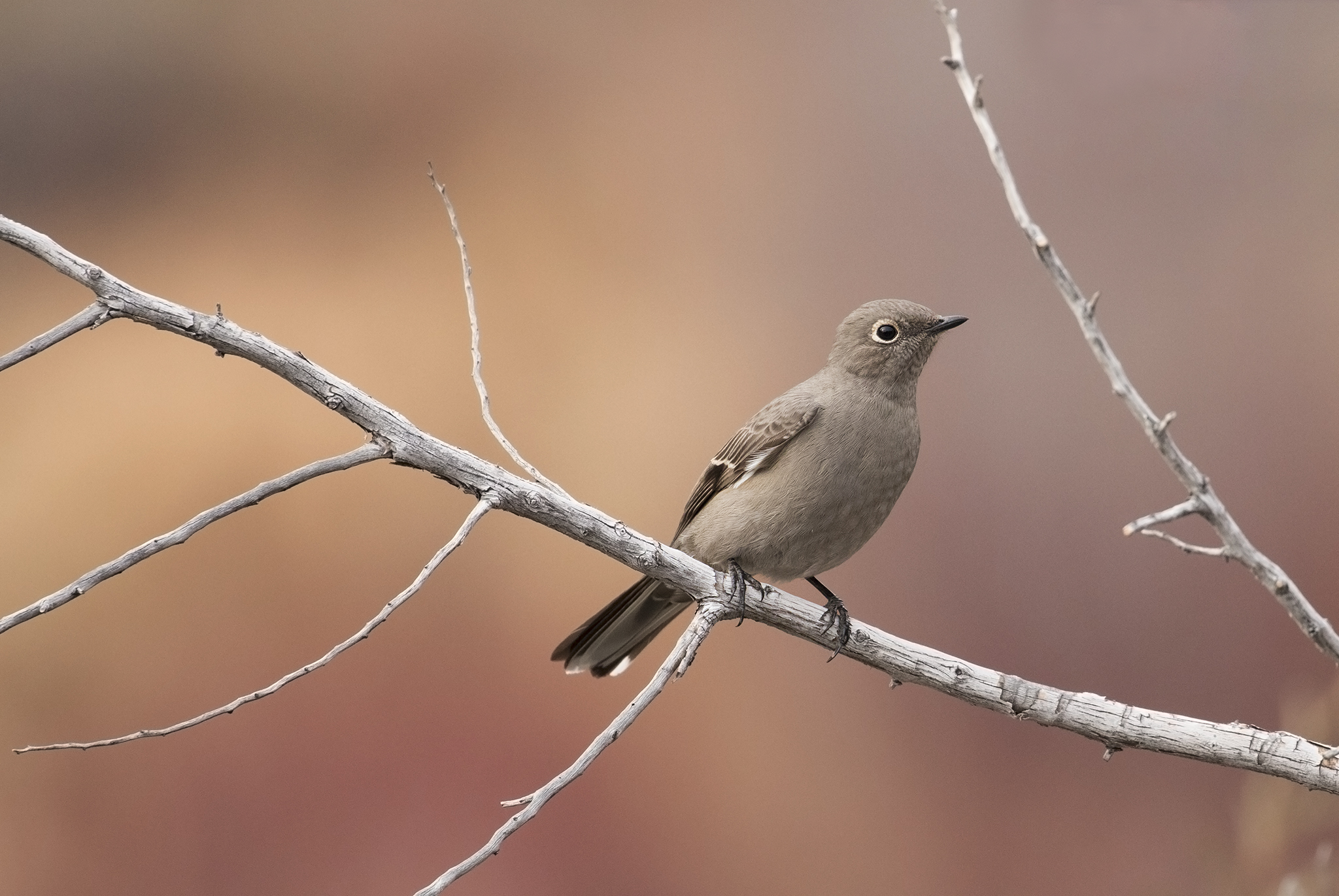 As the high-desert nights grow colder and the days shorter, most birds leave the Harney Basin for warmer climes. Some hardy species, such as the great horned owl, Northern flicker and song sparrow, resolutely stay put all winter, while others migrate into the basin to seek reprieve from even harsher conditions. One of these winter visitors is the Townsend’s solitaire.

Beginning in late August, the foothills of the basin, filled with juniper trees and flanked by lichen-covered rimrock, ring with the flute-like calls and songs of Townsend’s solitaires. In our region, these thrushes migrate down from the mountains to take advantage of food sources at lower elevations through the winter.

Powdery gray overall, with tan wing bars, white outer tail feathers, and a dainty white eye­-ring, the unassuming solitaire would likely go unnoticed if it weren’t for its exuberant voice, calling and even singing in the dead of winter. Both sexes look alike, and both sing year­-round. The song of the solitaire has been described as “[an] infinitely fine and sweet rendering of mountain music…in rippling cadences not shrill, but in an infinite number of runs and modulated trills, dying away again and again to low plaintive whispering notes…” (Forrest S. Hanford, 1917). To establish and defend its territory, the solitaire’s piping one­-note call is broadcast loudly, as often as 30 times a minute.

First collected by naturalist John Kirk Townsend along the lower Willamette River in 1835, the solitaire exhibits a confounding mix of traits. Its drab plumage and habit of sallying forth to capture insects in flight is reminiscent of tyrant flycatchers, but its melodious voice and speckled young betray its kinship with thrushes. Townsend collected only one bird, a female–but this was enough for John James Audubon to describe the species and name it in his honor in 1838.

Townsend’s solitaire is a habitue of montane forests and meadows, found year-round in much of the lntermountain West. Alongside the mountain bluebird, these thrushes are most at home in high, mountainous country.

In the summer, solitaires frequent high-altitude forests, sometimes ranging beyond tree line in search of invertebrate prey. Perching at the tops of trees or shrubs, these birds fly out to capture insects mid-air with an audible snap of their bills; they also perch closer to the ground, in the manner of bluebirds, to scan the forest floor for prey.

These birds nest on or near the ground, in any crevice with a sheltering overhang. Solitaires are known to build nests under logs and stumps, in the lees of boulders, or along steep roadcuts and trails. In the lntermountain West, solitaires nest at elevations ranging from 7,000 to 10,500 feet above sea level; at their northerly breeding areas in northwestern Canada and Alaska, nesting occurs at much lower elevations.

By autumn, most solitaires migrate to the lowlands to subsist on winter fruits. In our region, solitaires are particularly dependent on the “berries” (actually the modified female cones) of juniper trees. Solitaires of both sexes become fiercely possessive of prime juniper trees in winter, and may chase away not only other solitaires but other fruit-eating birds. This is where the solitaire earns its name: perching high and alone in a prime juniper crown, sharply proclaiming its territory and warning off interlopers.

This winter, look for the solitaire broadcasting its sweet soliloquy throughout the basin’s foothills, or anywhere where fruit-laden trees or shrubs are abundant.