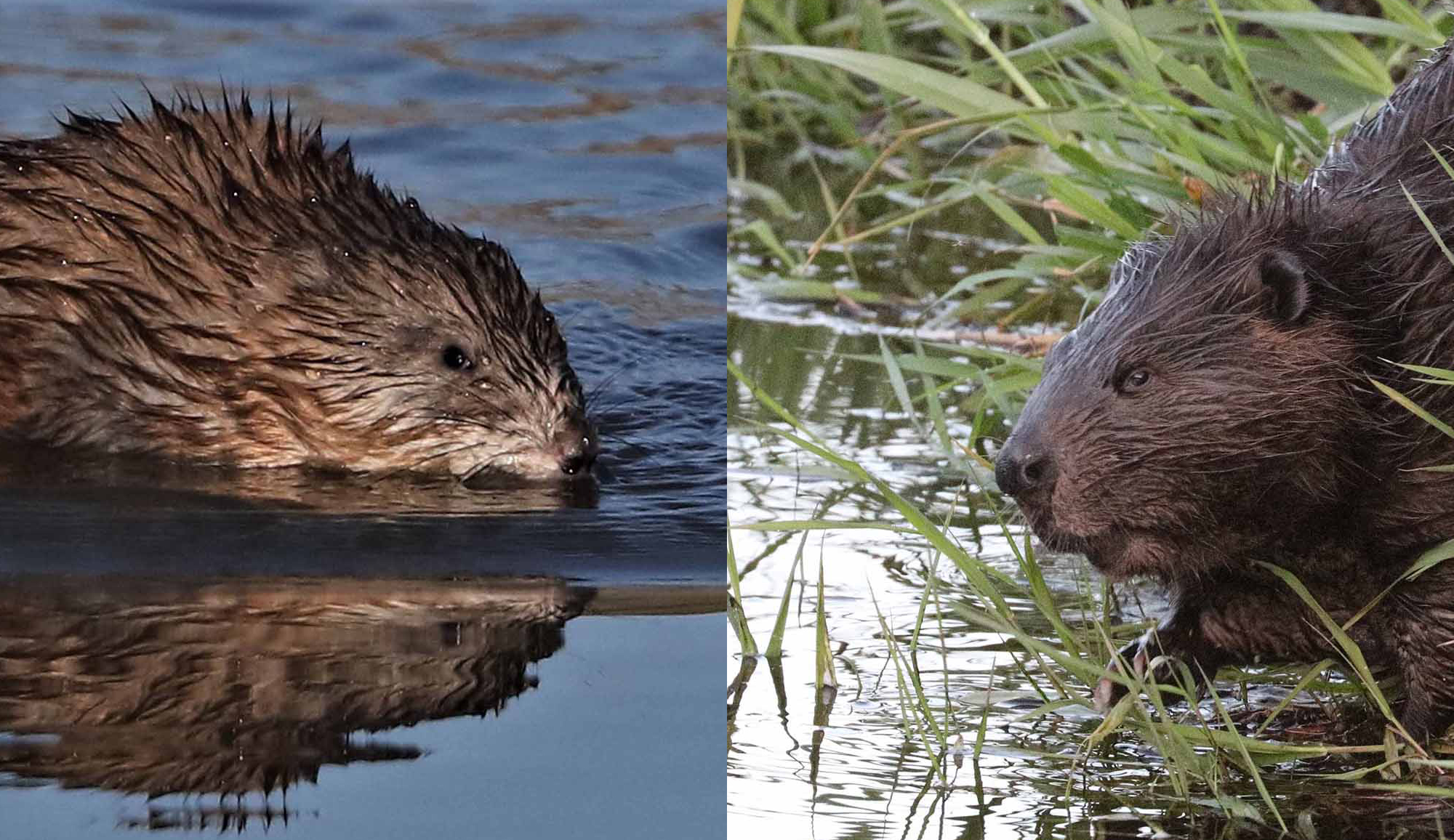 The vast marshes and riparian thickets of Harney Basin are a sanctuary for water-loving wildlife, from the scores of birds, insects, amphibians and fishes using its waterways to more than 50 native mammal species. Of these mammals, several are specially adapted for the life aquatic, including the American beaver (Castor canadensis) and the muskrat (Ondatra zibethicus).

From time immemorial, beaver and muskrat were hunted by Harney Basin’s indigenous peoples for food and pelts. When the first Euro-Americans arrived in the basin in the 1820s, their primary pursuit was fur, especially that of beaver and muskrat, for use in garments.

Since both species occur at Malheur Refuge, often in the same habitats, it can sometimes be tricky to tell them apart–particularly at a distance, and if the animal is partially submerged. Owing to their similar lifestyles, beaver and muskrat share several physiological and behavioral traits. Both semi-aquatic rodents possess webbed back feet and thick, brownish, water-resistant fur. Both can remain submerged for up to 15 minutes at a time. Both are most active at night, feeding predominately on vegetation, and neither hibernates during the winter. Both build their dwellings at water’s edge using local plant materials.

While beaver and muskrat have much in common, there are clear differences between the two. Most know that the beaver’s tail is distinctively wide and flat, covered not in hair but scales. The muskrat’s tail, while similarly scaly, is long, thin and slightly flattened vertically. While swimming, a muskrat’s tail sweeps side to side, like a fish’s; the beaver’s paddle-like tail pumps up and down, like a dolphin’s.

Beavers are much larger than muskrats, weighing between 35 and 60 pounds. A full-grown muskrat reaches only 4 pounds. When swimming, a muskrat usually shows its entire body near the surface; beavers show only their heads. The ears of a beaver are also more visible than those of a muskrat.

The waterside dwellings of beaver and muskrat are often noticeably different in their construction. A beaver lodge is typically dome-shaped, employing copious amounts of mud daubed over sticks and logs. A muskrat lodge uses lighter materials (such as bulrush and cattail stalks) which are piled over a solid foundation, such as a tree stump. Sometimes these rodents leave tracks in the mud near their lodges: A muskrat’s drooping tail leaves long, skinny marks as it walks, while a beaver’s wide tail tends to drag through part of its tracks, obscuring them.

No matter the season, wildlife watchers at Malheur Refuge may chance upon seeing one or both of these water-loving rodents plying marshes, sloughs or river channels during their visit. Hopefully this blog post helps to ease any identification challenges!