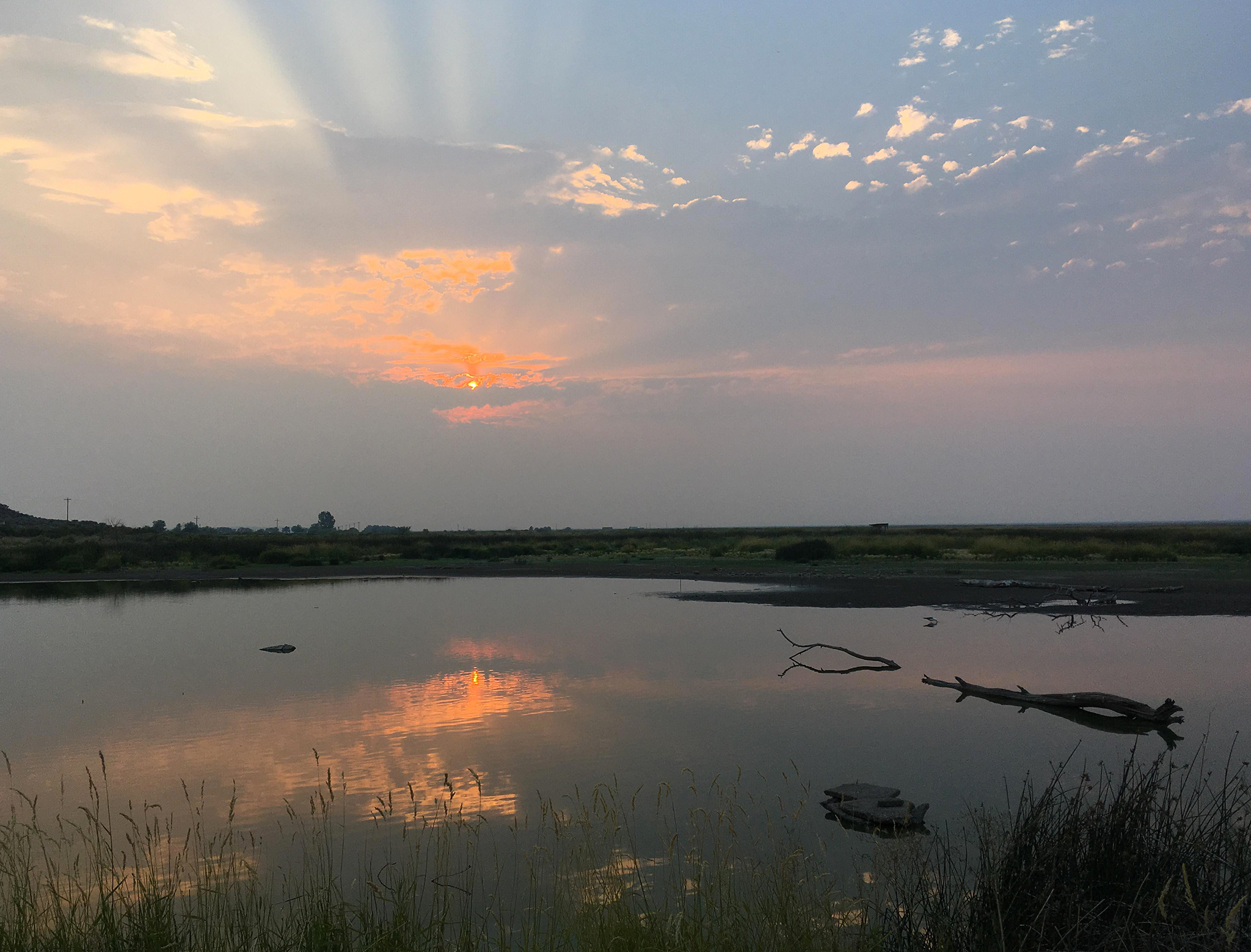 An iconic feature of Malheur Refuge Headquarters is the display pond, also known as Marshall Pond (learn about David Marshall here), fed by an underground spring. The first documented use of this spring by humans occurred around 6,000 years ago, when predecessors of the Burns Paiute Tribe, known as the Wada’tika (meaning “waada eaters”—a native marsh plant), settled there to take advantage of seasonal resources such as fish, ducks, antelope, coyote, muskrat, bison and a variety of plant materials. Based on archaeological evidence found at the site, the spring likely has been flowing continuously for many thousands of years.

Over the past three or four years, however, the spring’s output appears to be waning. Persistent drought, as well as recent groundwater developments in the area, may have drawn down the local aquifer. At any rate, during this hotter-than-average summer, Marshall Pond has fallen unusually low and is shrinking by the day. While this is an unfortunate scenario for the wildlife and visitors that use and enjoy the pond, it provides a unique opportunity to see, on a much smaller scale, what occurs at Malheur Lake through the summer.

The shallow lakes at Malheur Refuge—Malheur, Mud and Harney Lake—are subject to marked seasonal fluctuations in size, depending on winter snowpack and evaporative losses in summer. The process begins early each year and many miles away from the Refuge, at high elevations in the Steens and southern Blue Mountains. As snow accumulates in these mountains during the winter and melts in the spring, it recharges Malheur Lake, providing thousands of acres of water for common carp, an invasive species, to spawn. Large mature females can lay anywhere from 100,000 to one million eggs each year. By midsummer, millions of young carp, 1-3 inches in size, are found throughout the Malheur Lake system and connected bodies of water, including Marshall Pond. (Learn more about how non-native carp impact ecological functions at Malheur Refuge.)

By late July, most of the snow has melted and evaporation rates on the lake exceed water input from the Blitzen and Silvies Rivers. The lake starts to dry up, exposing hundreds of acres of mudflats that provide ideal habitat for migrating shorebirds. As summer advances, the remaining lake water is concentrated in isolated pools a few acres in size.

As these small pools of water evaporate, carp become trapped and provide an easy food source for an incredible variety of birds, from osprey, pelicans, cormorants and mergansers to egrets, herons, terns, gulls and even the odd shorebird! In wetter years, this spectacle can be especially dramatic at The Narrows, where Malheur Lake empties in Mud Lake. But since The Narrows is completely dry this year, Marshall Pond may be the next best place to witness this late-summer phenomenon.