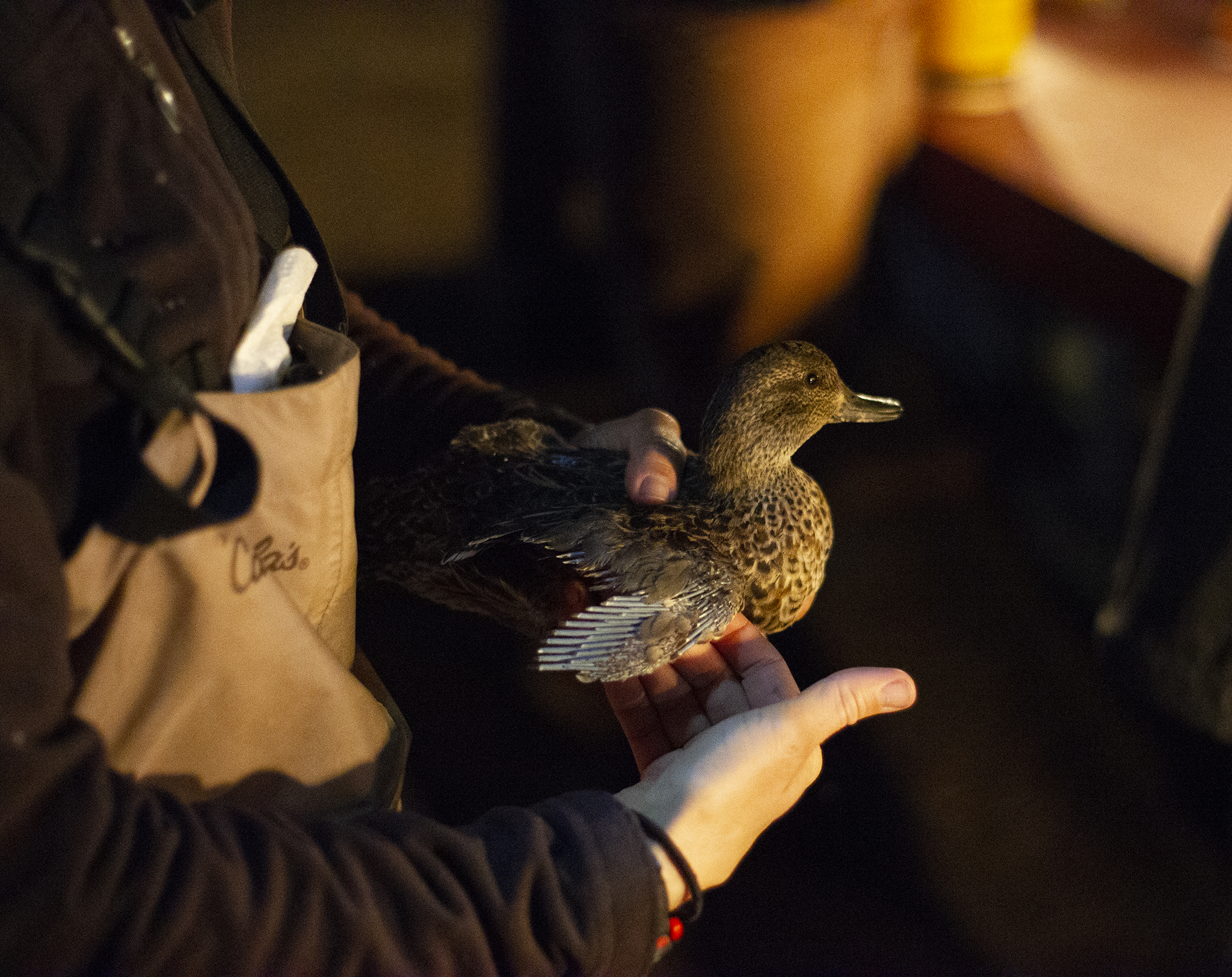 On the evening of August 15, under a waxing crescent moon, staff and volunteers from U.S. Fish and Wildlife Service (USFWS) and Oregon Department of Fish and Wildlife (ODFW) convened at Malheur Refuge’s Boca Lake to band ducks. In the gathering darkness, a temporary banding station, illuminated with propane-powered lamps on wooden tables, was erected near the lake’s boat ramp. On the tables stood rods of metal waterfowl bands arranged vertically, like gleaming towers of miniature onion rings; a dozen or so banding pliers were arrayed nearby. Empty plastic orange crates to hold ducks were stacked several feet high, ready to be filled.

The assembled crew of 15 individuals—including staff from Friends of Malheur Refuge, Audubon Society of Portland, and the Burns Paiute Tribe—was waiting until the moon set behind rimrock to the west before starting the night’s work. As they passed the time swapping stories and drinking coffee, the night grew darker, revealing the Milky Way shining above through high clouds and wildfire haze. A few late-arriving Perseid meteors streaked across the unbounded Harney Basin sky. By around 10 p.m., it was dark enough to begin.

Every summer, USFWS staff from Malheur Refuge pool resources with ODFW staff to band waterfowl at Summer Lake Wildlife Management Area (administered by ODFW) and Malheur Refuge. Both agencies manage waterfowl populations along the Pacific Flyway and frequently collaborate on conservation projects, including these so-called “nightlight” surveys. The surveys usually occur every year in July and August, depending on water levels at each site. For both months, a week is set aside in which surveys take place at both Summer Lake and Malheur Refuge, often on consecutive nights.

Banding at night, often under a moonless or nearly moonless sky, allows staff and volunteers to capture waterfowl in near-total darkness, while birds are resting on the water. Airboats are used to navigate the shallow, vegetation-choked waterways characteristic of these southeast Oregon sites. The airboat operator uses a spotlight to locate and single out ducks for the “catchers”, kneeling at either side of the boat’s prow, to pursue.

When a duck is spotted, the operator keeps the light on the bird and pilots the boat toward it, as the catcher prepares to scoop it up. The catchers use trout nets or sometimes their bare hands to grab the ducks, which are quickly placed in plastic crates. Once the crates are full of ducks, the boat heads back to the banding station, where the crates are unloaded and empty crates are brought on for another foray. This process continues until all the crates are filled with ducks or until dawn lightens the sky, whichever comes first.

At the banding station, staff and volunteers remove ducks one by one from the crates to band them. The species, sex, and relative age of the ducks is determined by the bander, checked and recorded by a biologist, and a leg band of appropriate size for the species is placed on the bird. The banded birds are placed in crates until the predawn hours of morning, when they are released. If any of the captured birds happen to already sport a band, their band numbers are recorded before release.

An average of 300-800 ducks are banded each night at Summer Lake and Malheur Refuge during these sessions. On the night of August 15, the total came to 576, as the crew captured and banded scores of mallard, gadwall and green-winged, blue-winged and cinnamon teal; as well as smaller numbers of Northern shovelers, Northern pintail and ruddy ducks. As the sky brightened to the east on the morning of August 16, the crates of banded ducks were carried over to the boat launch for release. Some ducks burst explosively on the wing from their crates; others paddled purposefully toward the marsh—all were presumably eager to return home.